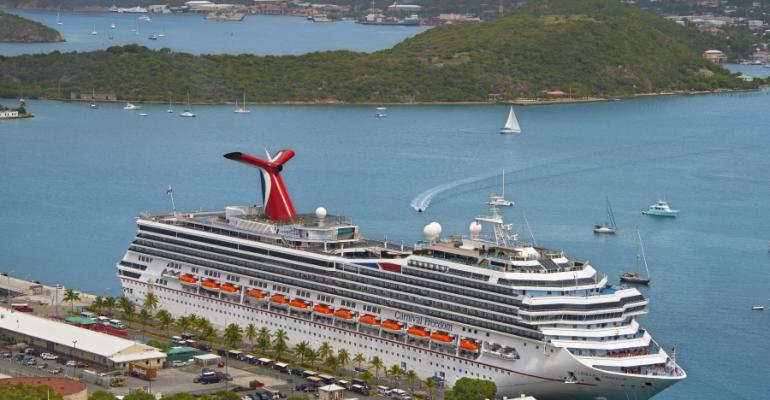 Carnival brand has sacrificed some occupancy to hold pricing in a more competitve Caribbean environment than expected. Pictured: Carnival Freedom in St. Thomas

However, Carnival raised its full-year EPS range to $1.60 to $1.75, up from $1.50 to $1.70, citing mainly a rebound in its European brands' net revenue yields, which turned positive in the second quarter.

The company doesn't expect such a shift for its North American brands until Q4, when net yields are projected to be up slightly.

Q3 net yields are forecast to be flat to down slightly due to a significant industry capacity increase in the Caribbean. Carnival Cruise Lines has been testing a new revenue management strategy of holding price at the expense of occupancy, and it's the lower occupancy that's causing lower net yields in the current quarter, according to corporate cfo David Bernstein.

'It was a more promotional environment in the Caribbean than expected,' Bernstein told analysts during the company's earnings call. He indicated other positives are offsetting that.

'Caribbean prices in Q3 are actually up for CCL, but yield is down because of lower occupancy, CCL allowing cabins to go empty in order to preserve price, not only in the quarter but also for the longer-term value of the brand,' analyst Robin Farley of UBS Investment Research said in a note.

Bernstein and ceo Arnold Donald said Q3 could be an inflection point for the Caribbean, in part because the Q4 year-over-year capacity increase will not be as great.

While the quarter will have even more Caribbean exposure than Q3 at 30% of Carnival's capacity, UBS said the Caribbean market overall will be increasing 13%, down from the 22% spike in Q3, and CCL itself will have just a 5% to 6% increase versus its 19% increase in Q3.

And in 2015, Carnival will cut back Q3 Caribbean capacity, according to Donald.

William Blair & Co. remains neutral on the stock since a valuation of 18 times the brokerage's $2.13 EPS estimate implies 'a strong earnings recovery in 2015, for which we continue to see scant evidence,' analyst Sharon Zackfia said in a note.