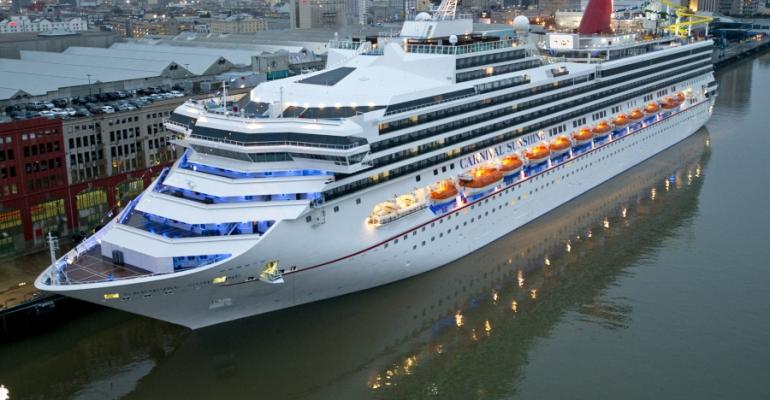 Carnival Sunshine—the first ship to feature all of the Fun Ship 2.0 dining, bar and entertainment innovations—will operate 20 varied voyages from New York in 2016 between June and October. This marks the first time a Fun Ship 2.0-equipped ship will offer such a diverse itinerary schedule from the Big Apple with options ranging from two-day cruises to 10-day Caribbean voyages. There's a Bermuda cruise, as well.

Plus, Carnival Sunshine will offer a series of sailings from Charleston, South Carolina, and Norfolk, Virginia, in summer and fall 2016, providing new cruise choices in these markets. Following these departures from New York, Charleston and Norfolk, Carnival Sunshine will return to its current homeport of Port Canaveral, for five- to eight-day voyages beginning in November 2016.

From New York, the ship's schedule includes two-day cruises on June 18 and Oct. 16, four-day cruises to New Brunswick's Saint John on June 30 and July 28, and five-day sailings to Saint John and Nova Scotia's Halifax on June 20 and 25 and Oct. 10.

From Charleston the cruises include two-, four- and five-day sailings, with destinations in the Bahamas. A 10-day Carnival Journeys cruise visits St. Thomas, Antigua, Martinique, St. Kitts and San Juan.

The choices from Norfolk include a pair of two-day cruises, a five-day jaunt to the Bahamas, a five-day Bermuda cruise and a six-day Bahamas cruise to Nassau, Half Moon Cay and Freeport.

A variety of seven-, eight- and nine-day cruises from the Central Florida port are planned, too.

In 2015, Carnival Splendor will operate a series of four- to eight-day voyages from New York to the Caribbean, New England and eastern Canada and two- to seven-day departures from Norfolk to the Bahamas and Bermuda.