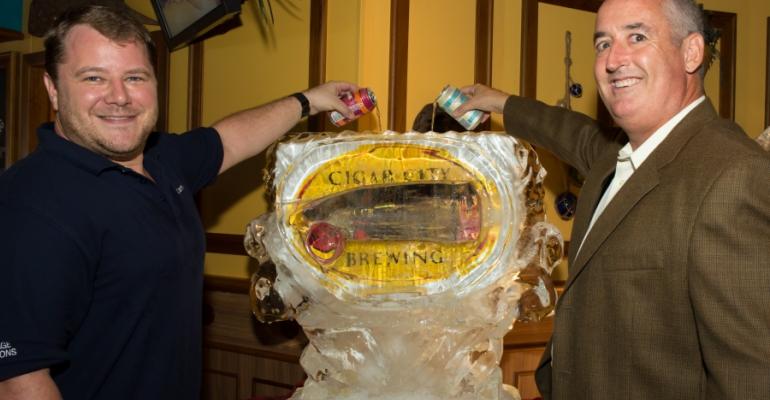 Capitalizing on the growing popularity of craft beer in the US, Carnival Cruise Lines forged an exclusive agreement to offer Tampa-based Cigar City Brewing’s craft beers on all of its Florida-based ships.

The agreement was announced Sunday at an event aboard Carnival Legend in Tampa.

'Cigar City Brewing craft beers are a fantastic addition to our already extensive beverage menus and will provide our guests a chance to enjoy two delicious and refreshing beers that aren’t available on any other cruise line,' said Eddie Allen, Carnival’s vp beverage operations.

Carnival also offers its own private label draft beer, ThirstyFrog Red, which is available throughout the fleet.

Joe Burns, national sales manager for Cigar City Brewing, said his company is thrilled to partner with Carnival, which he called 'another great Florida institution.'

Paul Anderson, Port Tampa Bay president and ceo, expressed his satisfaction, too. 'We are delighted to see two of Port Tampa Bay’s partners come together in such a big way, and we look forward to continuing to work with both of them for many years to come,' he said. 'This is a feather in Tampa’s cap, and people from all over the world will literally be able to sample the culture of our unique city. We at the port are very proud to have initially brought these two organizations together and also be a part of this success.'

Carnival has 13 Florida-based ships sailing three- to eight-day cruises to the Caribbean, Mexico and the Bahamas.

Florida Cracker Belgian-Style White Ale is named for the colonial-era 'cracker' cowboys of Florida. It's brewed with unmalted wheat, orange peel and coriander, which ends with a spicy, dry finish. The beer is cloudy straw in color when poured and has moderate notes of orange peel, coriander and hints of vanilla.

Invasion Pale Ale is Cigar City's version of a 'session' beer (a beer with a relatively low alcohol content), in a hoppy ale whose marketing is hinged on Tampa’s alleged history as a pirate hideout. The tropical aroma suggests peach, mango, lime and papaya. Gold in color, Invasion has a light caramel malt character laced with a slight 'breadiness'; the finish has tropical and citrus hop flavor and bitterness.

Unlike most US craft breweries, Cigar City Brewing packages most of its beverages in aluminum cans. The company said aluminum cans are the most widely recycled containers in the US, and aluminum may be reused repeatedly without loss of strength or quality.

Other advantages are that the cans have zero light penetration to better preserve the brew, they chill faster, are easier to store and have a longer shelf life than bottles. Cans also are shatterproof so they're allowed where bottles are not, such as poolside.