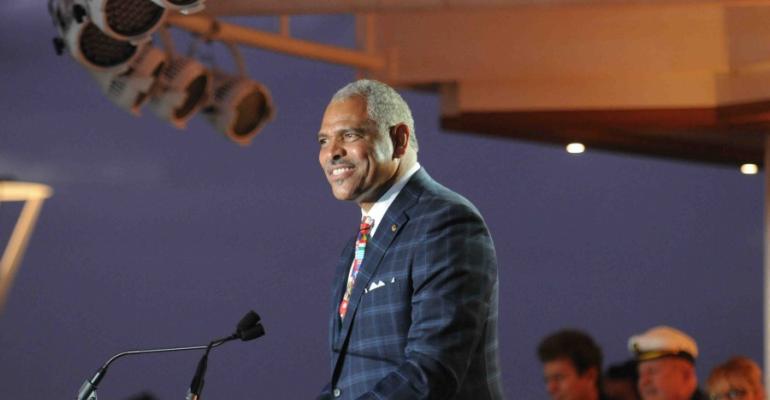 Carnival Corp. & plc has substantially raised its advertising spend and its brands are getting a larger 'share of voice' in the market, while positive media mentions shot up a whopping 66% from 2013 to 2014, president and ceo Arnold Donald said Tuesday.

Carnival's advertising spend rose from $525m in 2012 to $625m in 2014. This year opened with a multi-brand marketing campaign that has generated 10.1bn impressions.

In 2014 Carnival's 'share of voice' was 63% in North America, and even higher in markets like Germany, Donald told the company's annual shareholders meeting. He said the company was reversing negative media mentions.

Of 10.6m passengers Carnival carried during 2014, more than 3.4m were first-timers. Many of those new to cruising are from emerging markets like Australia and Asia, particularly China—which Donald stated would become the largest cruise market some day.

In 2006, three-quarters of passengers carried by Carnival brands were North Americans; currently that number is fewer than three of five.

Donald talked about the 'proud family' of nine 'powerful brands' and said the company is leveraging its scale and accelerating its path to achieving double-digit return on invested capital. ROIC was up 1% in 2014 and Carnival projects another 1-point increase in 2015.

Share price rose 22% in 2014 and the company distributed nearly $800m in dividends to shareholders.

Donald reiterated other data and guidance given during Carnival's first quarter earnings call on March 27, including that cumulative advance bookings are tracking ahead of the prior year, at higher prices. On-board yields in Q1 were up 8% year over year.

The Carnival chief recapped that 2014's $1.93 per share profit was higher than expected—in part, on the strong improvement by Costa Cruises and Carnival Cruise Line, and said fuel consumption was reduced another 5% per available lower berth day, which translated to an additional 14 cents per share. The company also exceeded its carbon emissions reduction goals.

Carnival has three newbuilds on order for delivery through 2018, with a further nine more planned for 2019 to 2022, under recently announced long-term partnerships with Fincantieri and Meyer Werft. During 2014, the company reached agreements to sell four older vessels.

Donald noted Carnival's 2014-2018 annual capacity growth is 2.9%, compared to industry growth of 4.5% a year. The strategy of more measured growth is 'creating the relative scarcity needed to drive yield,' he said.

He also mentioned product initiatives at each brand that particularly resonate with customers—ranging from Guy's Burger Joint on Carnival ships to Holland America's Dancing with Stars at Sea to AIDA Cruises' microbreweries.

The meeting, held in the UK—Carnival alternates between the UK and the US—got off to a testy start when a shareholder interrupted chairman Micky Arison's introduction to dispute the order of agenda items as 'illogical and insulting.'

The man complained about having to vote on resolutions prior to hearing the chief executive's report on the business, which may—he said—influence shareholders' voting decisions.

General counsel Arnie Perez noted the procedure had been followed for years and the agenda was published in advance, so the order of the meeting proceeded. Donald later said the company would take a look at the matter.

As has been its practice for some years, Carnival cut the webcast prior to opening the meeting to questions, leaving those not present in the dark.