Carnival's Christine Duffy: A leader who inspires the crew 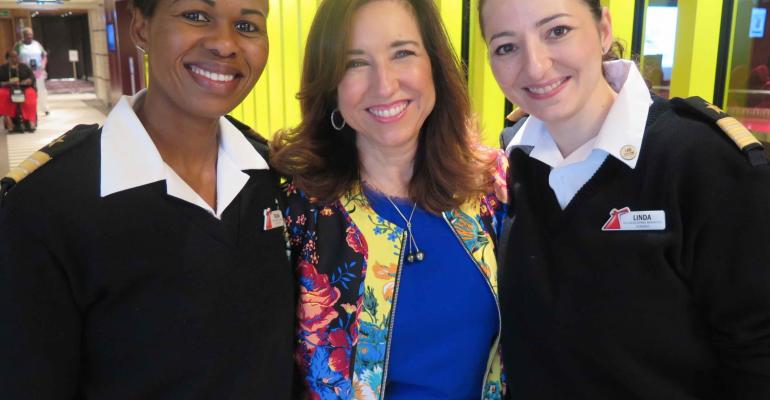 'We love her. She gives us energy' - crew members with Christine Duffy, center, aboard the new Carnival Horizon on Monday in the Mediterranean. At left is Thelma Moreki, guest services manager, and, at right, Linda Lazar, housekeeping manager
When Christine Duffy became president of Carnival Cruise Line in 2015, she famously visited all 24 Fun Ships in a year. The first vessel delivered on her watch, Carnival Vista, followed in 2016, and now Duffy's aboard No. 26, the new Carnival Horizon.

She's hosting an international media group but, just as important, Duffy is intensively interacting with the crew, an ongoing priority for her.

Treating the crew well is 'really important to me,' Duffy said, noting that's the right thing to do and the truth of the maxim 'Happy crew, happy passengers.'

When she visits a ship, the Carnival president doesn't just meet with the top officers but makes a point of stopping by below decks, including the laundry and the crew mess and crew galley. Occasionally, she pops into the crew bar, too.

'Our goal is that every single crew member understands the importance of what they do,' Duffy said. 'They're the front line.'

'She really interacts with the team on board, no matter their nationality or position,' confirmed Linda Lazar, Carnival Horizon housekeeping manager, from Romania. 'Every time she comes on board, she visits all the crew, including [those] in the laundry and the galley. She always does it.

'We love her,' Lazar said. 'Her personality is amazing. She gives us energy.

Duffy's presidency is particularly inspiring for the women who work on board.

Thelma Moreki, Carnival Horizon guest services manager, from South Africa—who was selected as team (crew) leader of the year for the entire Carnival fleet in 2016—said of Duffy: 'She's one of the people you look at and say "I want to be just like her."'

With cruising's robust growth, the need to recruit and retain quality crew is critical.

There are some perks to working on the new Carnival Horizon. This ship has the fastest Internet of the fleet, and Duffy said that's something the crew benefit from, along with the passengers. The crew pay for Wi-Fi, but having better connections with family and friends back home is a morale-booster. Also, Carnival Horizon passenger accommodations have a new standard of mattresses, and crew cabins are outfitted with that same make.

On Carnival Horizon and sister Carnival Vista, which brew their own craft beers aboard, those are served in the crew bar, as well.