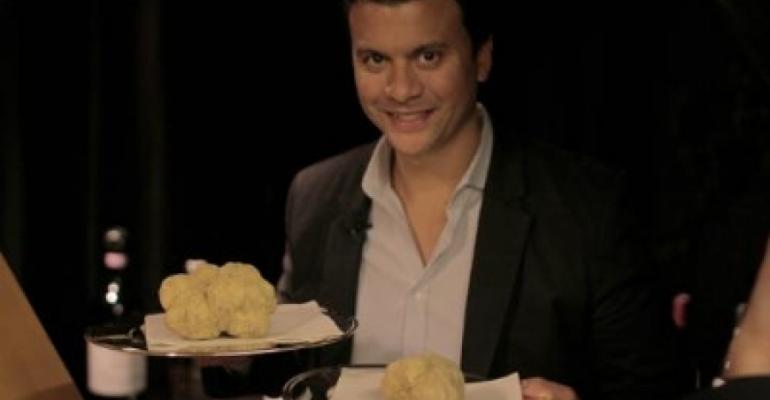 Chef John Suley with the white truffles he acquired for €15,000

Celebrity Cruises acquired two of the world's rarest mushrooms at the World White Truffle Auction in Grinzane Cavour, Italy, Sunday night. Celebrity executive chef John Suley traveled to the Piedmont region to place the winning €15,000 bid on the white truffles known as 'the diamond of the kitchen.'

Weighing a total of 700 grams, these truffles will be showcased at Celebrity's exclusive dining events.

The World White Truffle Auction, held at the 14th-century Castle of Grinzane Cavour, is an internationally recognized event, with previous satellite locations in Hong Kong, Moscow, London and Tokyo. All proceeds from the auction benefit charity.

Suley, a James Beard-featured chef, participated in the invitation-only event to represent Celebrity among the culinary elite.

'White truffles are the ultimate luxury, and Celebrity now has two of the rarest in the world,' Suley said, adding that these delicacies generate excitement among foodies for their distinct flavor, aroma and rarity—and they're only available during a short period of time each year.

Suley and his team will use truffles acquired at the auction to create an exclusive dining experience on board Celebrity Equinox during a 10-night Caribbean cruise departing Nov. 21 from Fort Lauderdale.

Truffle-themed dinners will be available on Celebrity ships for select Caribbean sailings in late November and early December. Plus, the winning delicacies will be featured at the James Beard Foundation's James Beard House in New York on Nov. 24, for a special truffle-and-wine-pairing event.