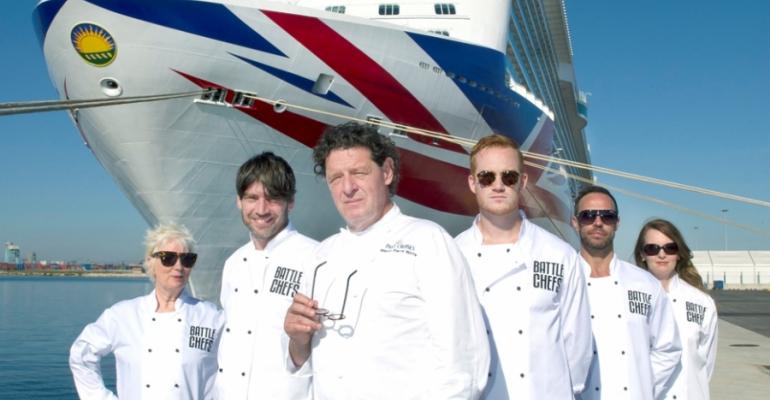 Celebrities, including Blur musician Alex James, actor Keith Duffy and comedian Jenny Eclair, take it in turns to command the cookery club kitchen on Britannia before being judged by the restaurateur Marco Pierre White.

Filmed across two Mediterranean cruises, the first voyage visits ports in Vigo, Lisbon, Cadiz, Valencia and Cartagena and the second, Barcelona, Rome, Cannes, Ajaccio and Alicante. Each cruise hosts a self-contained competition where five celebrities put their culinary skills to the test as they assume the role of head chef.

The trainee chefs sail from port to port discovering stories about each location and learning how to cook local specialities. With their new found skills they are split into teams to prepare a meal to impress White, the captain and his VIP guests as they compete to be crowned Battlechefs champion.

P&O Cruises vp marketing Christopher Edgington said, 'To set a celebrity-led cookery contest at sea is a TV first and we are proud to be involved in the show. The channel provides an ideal audience to introduce newcomers to cruising, highlight the P&O Cruises food experience and show the excellent facilities Britannia offers guests.'

One hour episodes of Battlechefs will be shown each weekday at 8 p.m. from April 4.