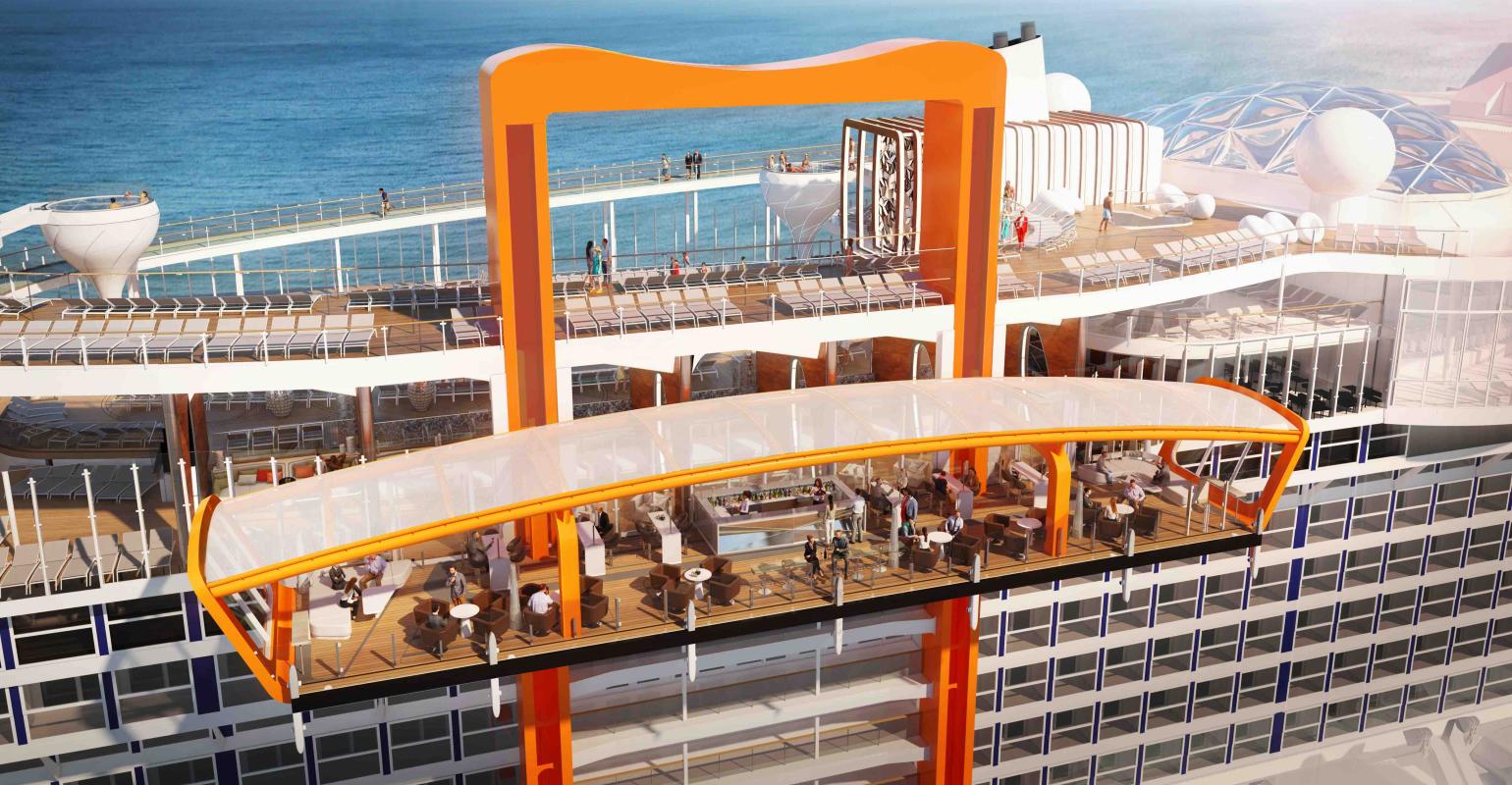 View from the Edge - on the Magic Carpet, a lounge-like platform cantilevered from the side of the ship that can move up and down

'We wanted to make something transformational,' said Richard Fain, chairman and ceo, Royal Caribbean Cruises Ltd. 'We brought in a caliber of designers you don't normally see on cruise ships' who added a 'surprising level of sophistication.'

Celebrity Cruises and its design ambassador Nate Berkus are revealing Celebrity Edge at RCL's Innovation Lab adjacent to company headquarters at PortMiami on the opening day of Seatrade Cruise Global.

The Magic Carpet, by visionary architect Tom Wright of WKK, is a platform the size of a tennis court that's cantilevered from the side of the ship. It serves as a lounge-like tender embarkation area where travelers will be whisked ashore via sleek Edge Launches.

The Magic Carpet can rise from sea level all the way up to Deck 16, where a 'Dinner on the Edge' experience for up to 90 people will be unlike any other. Or, when alongside Deck 14, the Magic Carpet becomes an extension of the pool area. And, at Deck 5, it provides alfresco seating for the restaurants.

The asymmetrical pool deck, also by Wright, features a Rooftop Garden with (artificial) designer trees that people can relax in and live greenery. One side of the deck has cabanas with soaring ceilings. And, continuing the theme of more connection to the sea, the resort (pool) deck chaise lounges face outward, overlooking the ocean. At night, the space will transform for live music and movie/meal pairings that are part of Celebrity's 'A Taste of Film.'

When it comes to the accommodations, creating more space and a greater connection to the sea was a key factor. Celebrity Cruises came up with something entirely new: the Edge stateroom with 'infinite' veranda. It not only changes the accommodations from inside, but how the sides of the ship look—almost like a smooth wall of windows.

By bringing the steel superstructure that normally encloses the verandas inward, to form a spine instead of steel boxes, Celebrity is incorporating the veranda into the room. The veranda doors, styled like elegant French doors, can slide to the side to make the veranda a seamless part of the room. When those French doors are closed, creating a separate veranda area, the top of a floor-to-ceiling outside window can be lowered to the open air.

'You get double duty out of the space,' Fain said.

Standard balcony staterooms across the cruise industry average about 15 square meters, with Celebrity Solstice's a slightly larger 16 to 17 meters. Celebrity Edge's will be much larger—about 21 square meters.

There are 918 of these Edge staterooms with infinite verandas, including 16 for solo travelers.

Celebrity Edge more than doubled the number of suites. Suites comprise 5% of the rooms on the brand's current ships; they'll be 12% on Edge, according to Celebrity president and ceo Lisa Lutoff-Perlo. 'More people want suites,' she said.

Two suite categories are new. At the top of the line: the pair of Iconic Suites, positioned above the bridge. These sprawl over nearly 2,600 square feet with two bedrooms and two baths, panoramic windows and a 700-square-foot veranda with 270-degree views.

The 146 Sky Suites were redesigned with beds that face the balcony, and each has a rocking chair with plenty of fluffy pillows. Behind the bed, a panel to the bathroom can open (it's a mirror on the bathroom side) to give the bathroom a view of the sea, as well. The bath has an ample oval tub with shower.

All suites and double occupancy staterooms are fitted with plush king-sized cashmere mattresses, with queen-sized mattresses in the solo rooms. In the Penthouse Suite designed by Hoppen, details include a swing chair (Lee Broom's brass hanging hoop chair) and elements like a NAAS lamp Bruno Moinard Editions and a Drew fabric chair by Restoration Hardware Modern.

In all accommodations, small touchscreens control temperature, 'scenes' (for example, 'wake up' or 'movie night' lighting/curtains), a 'green' mode and service request icons.

Details include a bathroom electrical outlet that can handle a hair dryer (not just a shaver) and a desktop box that artfully conceals USB ports and US and European electrical outlets. In the Edge staterooms with infinite veranda a vanity table can be slipped beneath the desk, giving more space and revealing the full-length of the lighted mirror on the wall.

Passengers can open their stateroom doors with a new, much more sophisticated app loaded to their smartphones that offers a host of other functionality such as the ability to breeze through embarkation (thanks, in part, to facial recognition related to a pre-loaded security photo), the possibility to plan and schedule activities, order drinks delivered where desired, and to make restaurant and excursion reservations and more via a virtual concierge.

(Fain said 15% to 20% of the total RCL fleet, including Royal Caribbean International and Azamara Club Cruises brands will have at least parts of this functionality this year.)

The 2,900-passenger (double occupancy) ship will be based at Port Everglades' Terminal 25, which is designing a Celebrity experience especially for Edge, Lutoff-Perlo told Seatrade Cruise News.