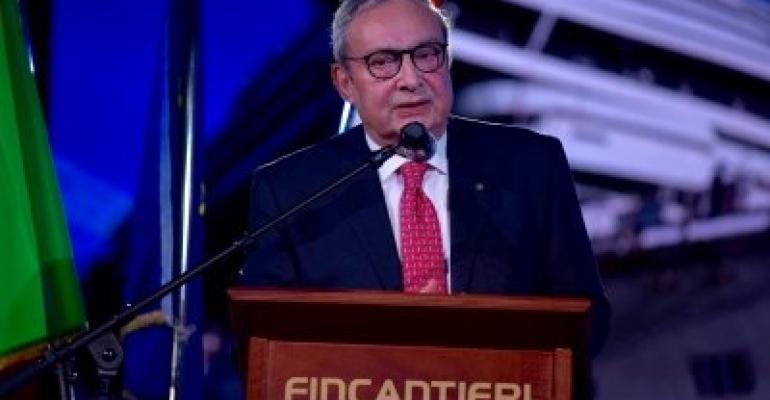 A period of challenging growth lies ahead that will require everyone's concerted efforts. Giuseppe Bono said upon his reconfirmation as Fincantieri CEO
Fincantieri's new board of directors has again confirmed Giuseppe Bono as CEO. The board recently met under the chairmanship of Giampiero Massolo, who also was confirmed by the shipbuilding group's shareholders.

Bono's confirmation received strong bipartisan support by the government and the opposition, as well as by the national industries, unions and regional administration authorities—though some government figures favored appointing a younger leader.

Bono steered the shipbuilding group through the troubled waters of the early years of this century, guiding toward a preeminent shipbuilding and industrial position, starting from only one, albeit very important, customer—Carnival Corp. & plc—into the whole range of companies across the cruise sector.

His renewed mandate through 2021 will allow Bono to support the STX France dossier closing to gain control of Chantiers de l’Atlantique, currently undergoing a review by the European antitrust authority.

Bono also pushed for a wider binational alliance with France's Naval Group, a military shipbuilding giant, to establish a European champion in the shipbuilding sector.

And he has presented Fincantieri shareholders with record results and average 9% yearly revenue growth over the last four years.

'2018 has been another year of record growth ... a year of expansion and revolution, a year in which we have reached the target set by the business plan,' Bono said during the recent shareholders meeting. He added that a period of challenging growth lies ahead that will require everyone's concerted efforts.

Shareholders authorized a €0.01 dividend after approving 2018's financial results, which showed a profit of €218m.

Responding to questions about the dividend distribution, Bono told the shareholders meeting: 'We could have given a higher dividend, but we have investment plans for €700 million to €800 million, all financed by the company. Therefore, most of our cash flow is devoted to these activities.'

Bono added that one of the values for shareholders is the stability these investment plans give, paving the way for Fincantieri's future viability and profits.

Looking to future developments in the maritime sector, Bono disclosed the company is an advanced stage of development for an autonomous and electric-driven 80-meter container vessel based on a contract received by its Vard subsidiary in August 2018.

Concerning ferries and the commercial ships segment, he cited the activities Vard is carrying out on electric-powered technology for short distance operations.

'We are working on batteries and Fincantieri's application for the cruise sector will be MSC Cruises' luxury cruise ships,' he revealed.

'Fincantieri is promoting sustainability and care for the environment. We have decided to structure our sustainability path by adopting an integrated strategy that is capable of combining business growth and financial stability with social and environmental sustainability, creating value in the long term, while involving our employees,' he added.

Looking to the company’s employment picture, Bono highlighted the need to find jobs for a greater number of women.

'We have to find the right conditions to support female engineers and employees during their career path. We would like to be among the first to find solutions,' he said.