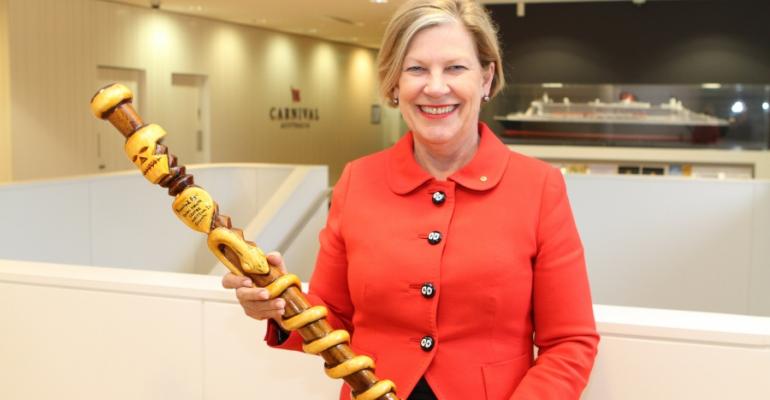 Carnival Australia ceo Ann Sherry has received a chief’s ceremonial walking stick from the people of Aneityum in Vanuatu as a thank you gift for a new health dispensary that has been provided by the P&O Pacific Partnership, a joint venture with Save the Children.

Aneityum is the southernmost inhabited island in the Vanuatu archipelago and its people paddle over to nearby Inyeug, which is known as Mystery Island, when a cruise ship visits to entertain the passengers and sell their handicrafts.

P&O Cruises Australia adds one optional dollar to each passenger’s shipboard account for the Pacific Partnership which has already completed three projects on Aneityum -- two kindergartens and an aid post.

The company’s destinations director Michael Mihajlov accepted the ceremonial walking stick on behalf of Sherry. Made from local hardwood it is entwined with a snake that represents medicine and a skull representing the human form.

In February Mihajlov unveiled the first shore excursions on Mystery Island -- a guided snorkel safari, a glass bottom boat tour and stand up paddleboarding. He said that although passengers have been going to Mystery Island for three decades, the tours had only just been introduced due to the absence of satellite communication, suitable management structures and insurance coverage.

There is now an Aneityum village tour which employs six guides and various handicraft producers.