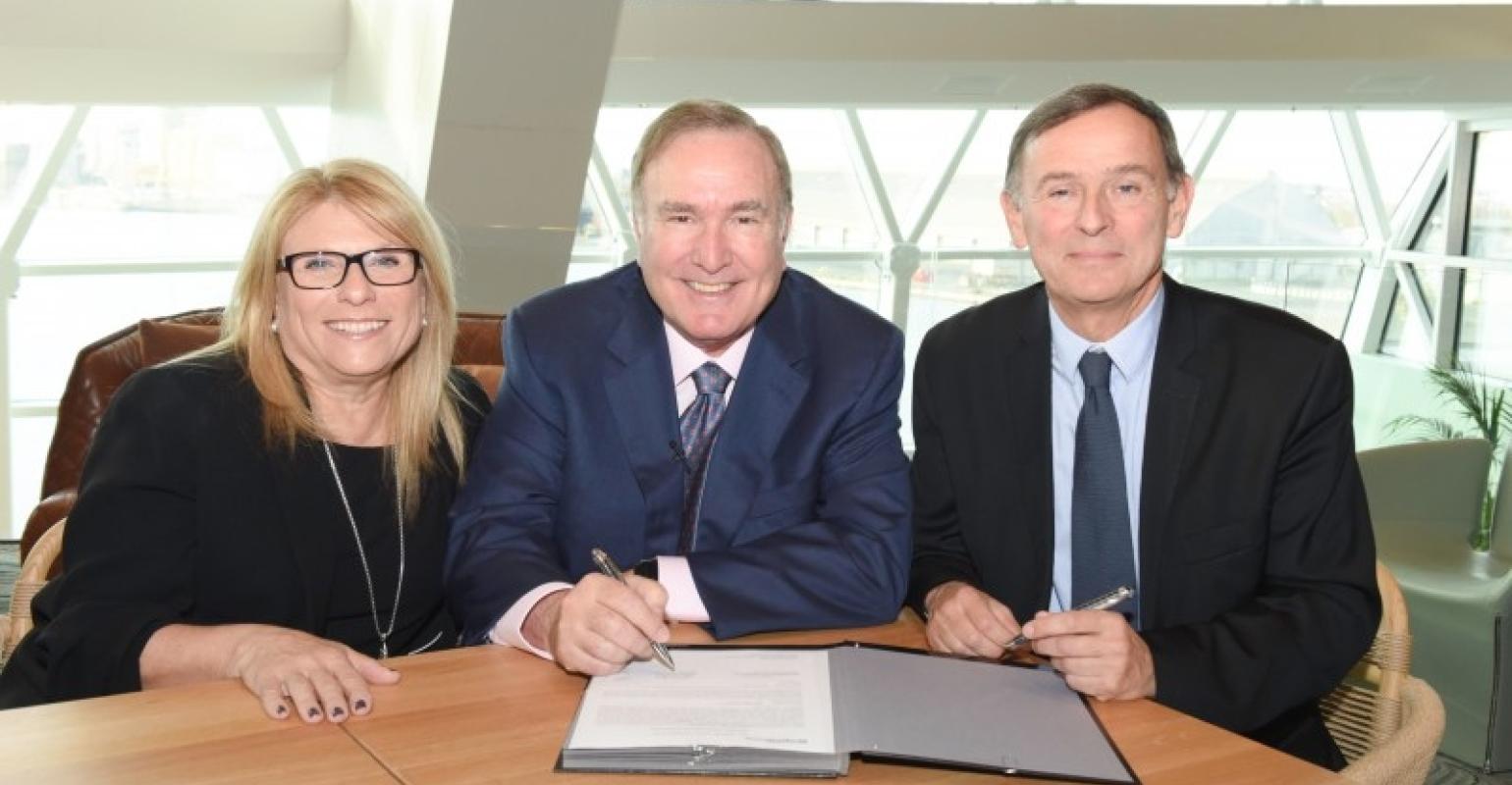 She's ours! Richard Fain signs for the new ship. At left is Celebrity's Lisa Lutoff-Perlo and at right, Chantiers de l'Atlantique's Laurent Castaign
One of the year's most anticipated and innovative cruise ships, Celebrity Edge, was handed over to Celebrity Cruises by Chantiers de l’Atlantique Wednesday.

Years of planning, many thousands of hands

This follows more than four years of planning and 23 months of construction at the skilled hands of thousands of engineers, architects, artisans, designers, contractors, shipyard employees and the Royal Caribbean newbuild and Celebrity teams.

Royal Caribbean Cruises Ltd. chairman and CEO Richard Fain and Celebrity president and CEO Lisa Lutoff-Perlo hosted a ceremony aboard the ship at Saint-Nazaire for the sign-over. Chantiers de l’Atlantique GM Laurent Castaing and other shipyard officials, Celebrity executive team members and 1,377 crew members from 72 countries were on hand.

'The Celebrity team has done an outstanding job and I cannot thank the Chantiers de l’Atlantique team enough for delivering this game-changing ship and for their ongoing partnership,' Fain said. 'Their work continues to transform the way our guests experience the world.'

'Today is a very special day for all of us as we have been eagerly anticipating this moment for more than four years,' Lutoff-Perlo added. 'There are so many aspects of Celebrity Edge that are more groundbreaking than we could have ever imagined, and it is all a testament to the hard work, creativity and talent of everyone who helped bring this magnificent ship to life.'

'Thanks to the confidence Celebrity Cruises granted us and to the exceptional level of cooperation between our respective teams, we are proud to have designed and built one of the most innovative cruise ships ever,' Castaing said. 'This achievement demonstrates once again our capacity to deliver right on time ships of the highest quality to our most demanding customers.'

Following the check-signing and delivery ceremony, attendees made their way across Chantiers de l’Atlantique for the keel-laying of sister ship Celebrity Apex, where a 762-ton block was lifted in the air and a lucky coin was placed on the dock before the block was lowered into position.

On Nov. 6, Celebrity Edge will begin its trans-Atlantic voyage to Port Everglades' custom-designed terminal, T25, for pre-inaugural events in late November and early December before kicking off an inaugural season of seven-night eastern and western Caribbean cruises. The maiden western Caribbean voyage departs Dec. 9, followed by the first eastern Caribbean sailing on Dec. 16. In the spring, Celebrity Edge crosses the Atlantic again to sail the Mediterranean with a range of seven- to 11-night cruises from Southampton, Barcelona and Civitavecchia (Rome).