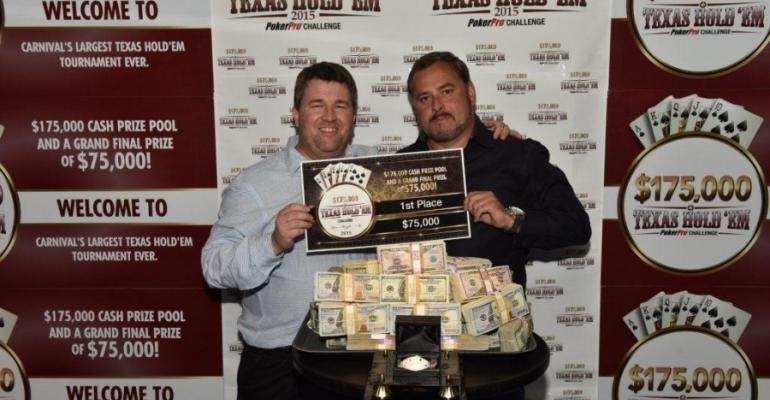 Carnival Breeze served as the venue for Carnival Cruise Line’s eighth annual Texas Hold’Em Challenge Tournament, attracting nearly 400 players who battled it out to take home their share of $200,000 in cash prizes.

As a special surprise, world champion poker player Chris Moneymaker came on board Carnival Breeze to host the final table of the tournament, held during an eight-day Caribbean cruise from Miami last week.

Moneymaker, an official HPO ambassador, said he was looking forward to playing with the 12 winners from Carnival Breeze in the Championship Event in Las Vegas.

'The HPO brand is committed to finding new ways to award seats to their signature Championship Event and the tournament on Carnival Breeze was a fun and interesting way for players to qualify for this exciting tournament. I’m looking forward to seeing how these players do on our big stage in Las Vegas,' Moneymaker said.

Gayle Gullo, Penn National’s corporate vp marketing, added that her company enjoys 'a great partnership' with Carnival and is thrilled their cruisers are among the field of HPO participants.

The Carnival Texas Hold’Em Challenge brings together passengers who qualified in a satellite tournament hosted on the line’s ships throughout the year, earning their chance to play in the Grand Final event aboard Carnival Breeze.

With 2014's prize pool reaching more than $1.5m, Penn National expects this year’s Hollywood Poker Open to raise the bar further by reaching $2m. Players can buy in to the event, as well as win seats in their regional tournaments held across various Penn National Gaming properties.