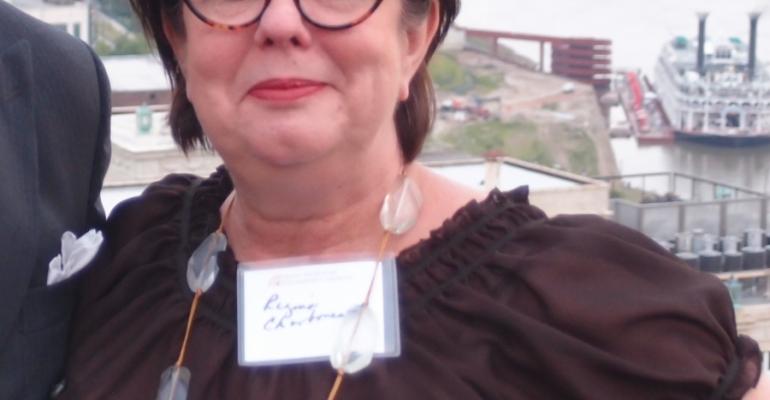 Regina Charboneau revives Mississippi River culinary traditions for holiday cruises. She is pictured in Memphis, with American Queen in the distance

Six 'Old Fashioned Holidays' voyages on American Queen are available in 2014 and 2015, including New Orleans round-trip or between New Orleans and Memphis, Tenn. These itineraries offer experiences like the old Louisiana tradition of bonfires on the levees, special Christmas shows in the Grand Saloon, door-decorating contests and woodcarver Jim Moore creating a Victorian Santa from a block of basswood.

Other highlights are seasonal culinary delights and desserts such as a Creole Réveillon Christmas Dinner, which can be found in the pages of Chef Charboneau's new book.

'As I researched the culinary history of the Mississippi River to create the American Queen menus, putting my new-found wealth of information into a cookbook was a natural next step,' Charboneau said.

A typical Réveillon menu served in homes along the Mississippi River or the fine restaurants of New Orleans' French Quarter included Daube glace or veal grillades, egg dishes, breads, puddings and often included turtle soup and oysters. There was an abundance of wines, cordials and fortified drinks.

Gradually this tradition began to disappear.

As the Réveillon is revived on the American Queen this winter, the menu includes Sazerac and Champagne cocktails, tomato aspic with fried oysters, deviled eggs with lump crabmeat and caviar, pheasant gumbo, pork grillades over savory grits, almond tarts and Bouche Noel.

Fares for the nine-day 'Old Fashioned Holidays' start at $2,549 per person, double occupancy, including a one-night pre-voyage hotel stay, shore tours on board deluxe motor coaches in all ports and wine and beer with dinner.