China and Cuba dominate CSM's State of the Industry debate 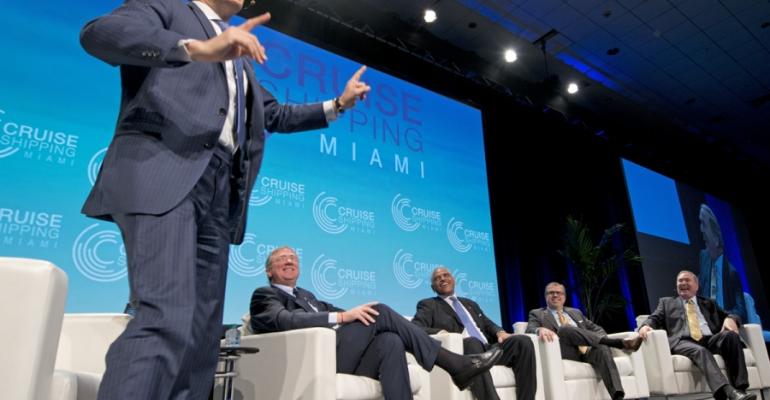 Exciting new destinations, issues of fun and sourcing of passengers for market expansion dominated a State of the Industry debate at Cruise Shipping Miami 2015, shifting the focus from more recent CSM opening sessions where crisis management and regulatory challenges have been lead topics.

Leaders from the four major cruise groupings spoke freely in a lively session where the ‘Two Cs’—China and Cuba—dominated talk of growth potential and demand.

Stagnant, deflationary pricing and the value it represents to passengers were also themes of the opening conference panel.

But while 23m passengers are projected to cruise globally this year, that total is ‘tiny’ among tourism segments, said Arnold Donald, ceo, Carnival Corp. & plc.

‘All the cabins in the world add up to only 1% of hotel rooms,’ Donald said.

China’s potential, both for sourcing passengers and as a destination, is a ‘clean sheet of paper’, Donald said.

‘Maybe Asians don’t like to sit with a cocktail by the pool but maybe they love the dining and the shopping,’ Vago said, adding that Asians like to ‘shop ‘till they drop’.

Cruise lines are crossing oceans to cultivate China—developing powerful domestic corporate ties in the giant nation, with Hong Kong/Greater China alone a source of 83m potential cruisers—but the lure of Cuba, only 90 miles from Florida’s Key West and 220 miles from the PortMiami, is long-awaited.

‘I bet we’re all ready to move at the drop of a hat,’ Del Rio said.

With China’s potential as the world’s largest ‘nation of tourists,’ annual industry growth should be double-, rather than single-digit, Donald indicated.

‘Our view is we always need to do better. I don’t think this is a time to rest on our laurels,’ Fain said.

‘The fact is we haven’t raised our prices in six years.’

Added Del Rio: ‘We have not achieved the ROIC that we should have.’

CLIA chairman Adam Goldstein, citing statistics released by CLIA in February, forecast 23m people will cruise globally this year, up 4% from 22.1m in 2014. In 1980, there were just 1.4m passengers.

Member lines are scheduled to invest more than $4bn this year, debuting 22 new ships, including 16 river vessels and six ocean, with 20,000 new beds.

An additional 5m cruisers sailed in the last six years, Goldstein said, with most bookings generated by travel agents.

‘Agents represent the backbone of our industry,’ he remarked.

The industry underwent a recent sea change of top leadership. Globally, 19 cruise lines made top executive leadership changes in the last 12 months, beginning in March 2014, a subject featured as the cover story of the March issue of Seatrade Cruise Review, the official publication of Cruise Shipping Miami that is to be re-branded Seatrade Cruise Global in future.