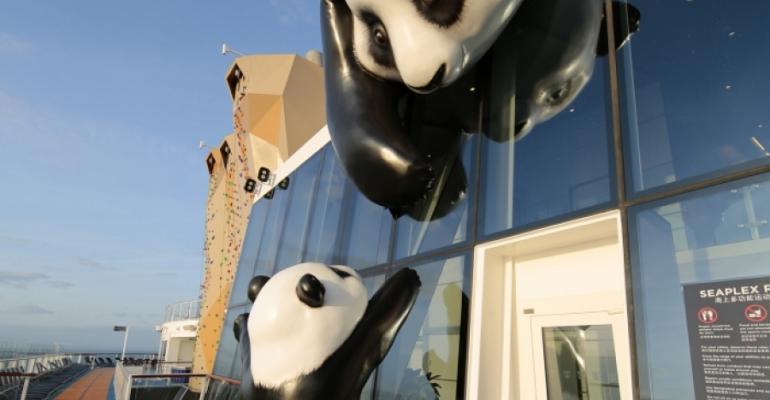 Ships personalized for the market - here, giant pandas on Ovation of the Seas (Photo: Royal Caribbean International)
China's cruise market grew 40%, to 986,000 passengers in 2015, about half of Asia's total 2.08m passenger count. Asia as a whole posted a 24% year-over-year passenger spike.

'While we expected Asia to experience record-breaking growth in cruise travel, we are astonished at the rate at which the region is emerging as one of the most significant cruise destinations and cruise source markets in the world,' CLIA North Asia chair Zinan Liu said.

'The cruise industry has been nimble and responded quickly to the demand for cruise travel in Asia by delivering cruise ships with amenities and experiences tailored to Asian travelers,' added Cindy D’Aoust, president and ceo, CLIA. In addition, Asia offers a growing number of destinations to entice international travelers, she said.

Asian source markets are becoming the new growth engine of the cruise industry, demonstrating an exceptional 39% compound annual growth in passenger numbers over the three years since CLIA's measurements began in 2012, according to CHART Management Consultants, which produced the 2012 and 2015 studies.

The absolute volume of cruise travelers sourced from Asia has nearly tripled since 2012.

Asians still cruise predominantly in Asia, the CLIA/CHART study found, with 84% sailing within the region in 2015. For those (341,000) who cruised outside the region, Europe was the top pick (74%), followed by the Caribbean/Western US/Hawaii (12%) and Alaska/Canada/New England (8%).

Shorter sailings remain the most popular, by far, with half of Asian cruisers choosing itineraries of four to six nights, followed by two to three nights (30%) and seven to 13 nights (19 percent). The average cruise length in 2015 was 5.3 nights (five nights for China specifically).

Concerning China specfically, in 2015 nearly 94% of passengers cruised in Asia, with most of those leaving from a close homeport. Some 3.6% took a fly-cruise within Asia, while a 2.7% sliver took a fly-cruise outside the region. Nearly 99% of Chinese cruisers sailed on a contemporary or premium segment ship.

'There's no reason to believe the pace of travel won't continue,' she said, citing China's booming outbound travel numbers, the increasing range of desirable locations to visit in the region (204 cruise destinations across 17 countries, the study said), the fact that ships are being deployed into and personalized for the market and, simply, because cruising is 'an easy and comfortable way to experience new destinations.'