China needed as a cruise shipbuilder to meet global demand 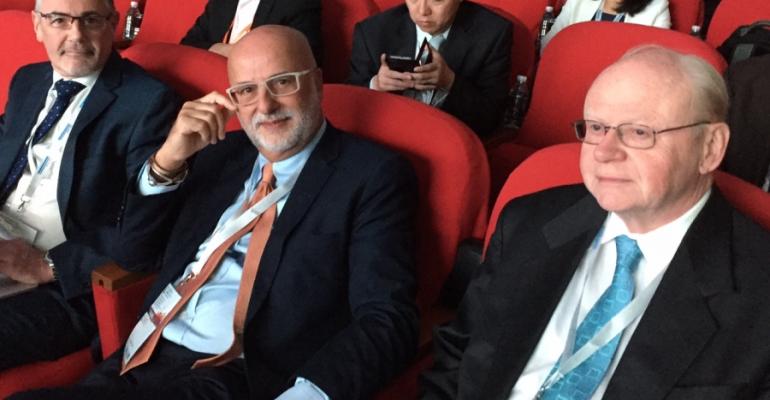 Fincantieri views China as a partner to explore a new market—at least for the first 10 years, according to Maurizio Cergol, center. With him are shipbuilding experts Raoul Jack, left, and Eero Mäkinen

With 95% of the global cruise shipbuilding market share dominated by three European yard groupings, China still has a long way to go in terms of becoming a cruise shipbuilding powerhouse. But to satisfy global industry growth, cruise ships will likely need to be built there, according to a panel of industry experts.

Eero Makinen, managing owner, Emmanoa Oy, calculates around five Chinese shipyards have shown interest so far. ‘Due to the complexities of building cruise ships, the number of shipbuilders has in fact shrunk from more than 20 in the past to just four today—three European yards and one from Japan,’ Makinen pointed out.

At the Seatrade Asia Pacific Cruise Congress in Shanghai Baoshan on Thursday, principal consultant Raoul Jack of PFJ Maritime told delegates: ‘There has not yet been a pure cruise ship built in China. However, there has been quick growth in the production of technically advanced ships from Chinese yards such as offshore platforms and LNG carriers.’

The Chinese shipbuilding mettle will be put to the test after China State Shipbuilding Corp. (CSSC) clinched a historic deal to build two 133,500gt cruise ships, plus two options, at its subsidiary Shanghai Waigaoqiao Shipbuilding (SWS). The first delivery to Carnival Corp. is set for 2022. Italian builder and designer Fincantieri will help with technical support and design work.

‘The Chinese government is fully backing the cruise shipbuilding process, and the key to success is coordination,’ Jack said. ‘Shipbuilding has attracted a lot more focus in the cruise market today, and China is going to do it.’

According to SWS chairman Wan Qi, cruise shipbuilding is the ‘new power’ to promote. The construction of offshore platforms and oil rigs was once the ‘golden egg’ for SWS before the offshore sector reversed into a recessionary state due to the collapse of oil prices and oversupply.

‘I hereby plea for confidence from the industry that SWS is fully capable of executing this cruise shipbuilding job,’ said Wang, who is also chairman of CSSC cruise technology development.

He said if global passenger growth predictions hit target, 15 to 18 new cruise ships a year would be needed worldwide. In China alone, the 2030 passenger count is expected to reach 8.5m, requiring five new ships each year.

Chen Shi, deputy chief engineer at China Classification Society, noted the Western design and style of cruise ships may not appeal to all Chinese passengers, pointing to the need for a more customised design that can be produced in China.

‘When we entered into cruise shipbuilding, it was a carefully calculated move. I would also like to reiterate that we are not seeking to become a competitor to Fincantieri but to be their business partner for the long term,’ Wang said.

Fincantieri also views CSSC as a long-term partner that would help the company reinforce its position in the Chinese market, according to Maurizio Cergol, naval architect and cruise vessel designer, head of marketing and new concept development department at Fincantieri.

‘In the first 10 years we are not creating a competitor; instead we have created a partnership to explore a new market. What will happen 10 to 15 years later is another question,’ Cergol told Seatrade Cruise News at the sidelines of the conference.

Cergol pointed out that the Chinese yard already has the capability and knowledge to deliver the right product, but it needs to know how to integrate all these capabilities and how to coordinate with its partners.

‘The mentality has to change to focus on quality instead of quantity. In merchant shipbuilding, quantity is important for the producer but, for cruise vessels, quality is the most important factor. Quality is in terms of not just the materials but also the management, coordination and support,’ he highlighted.

Wang agreed that while Chinese yards have lofty ambitions, there is a rather big gap between China and Europe in terms of quality such as comprehensive design ability, manufacturing integration capability and complex project management capability.

Zhu Qingwen, head of China cruise center at DNV GL, added another important factor that must not be forgotten is safety, since the ‘cargoes’ carried are human lives.

‘We are now living in a globalised market and it is inevitable that Chinese or Asian yards will eventually learn the technology to produce very high value product,’ Cergol said.