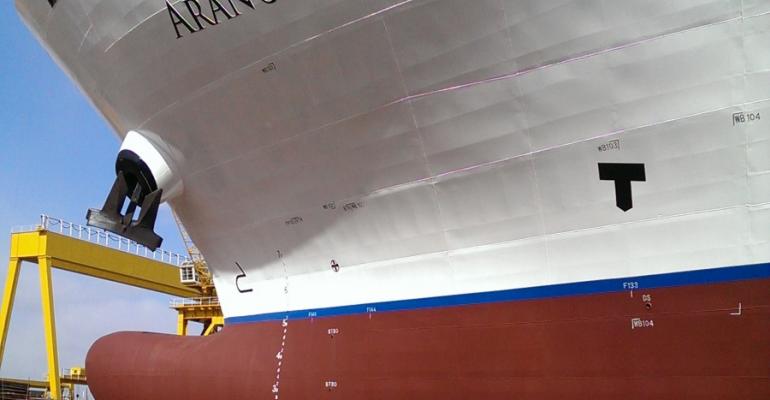 The Wong family, owners of Tahiti’s Aranui Cruises, travelled to Huanghai Shipbuilding in China’s northeastern Shandong province for the keel-laying of their passenger-cargo ship Aranui 5.
After the ceremony, which included firecrackers as well as a traditional bottle of Champagne, Laurent Wong, regional representative in Australia and New Zealand, confirmed the ship is on track to commence 14-day round-trip cruises from Papeete to the Marquesas, Tuamotus and Society Island in October.
Aranui 5 replaces Aranui 3 which will be retired after more than 12 years servicing the remote Tuamotu and Marquesas archipelagoes.
It will carry 256 passengers, offering a new range of accommodation that includes superior deluxe, presidential and royal suites.
The company’s 30th anniversary party will be held on board Aranui 3 when she departs Papeete on April 25. Each passenger will receive a gift—an on-board credit of around A$175.
As previously reported, there will not be an Aranui 4 as the number is considered unlucky by the third generation Tahitian-Chinese Wong family.
Copyright © 2023. All rights reserved. Seatrade, a trading name of Informa Markets (UK) Limited.
TAGS: cruise lines newbuilds yards events
0 comments
Hide comments
Related