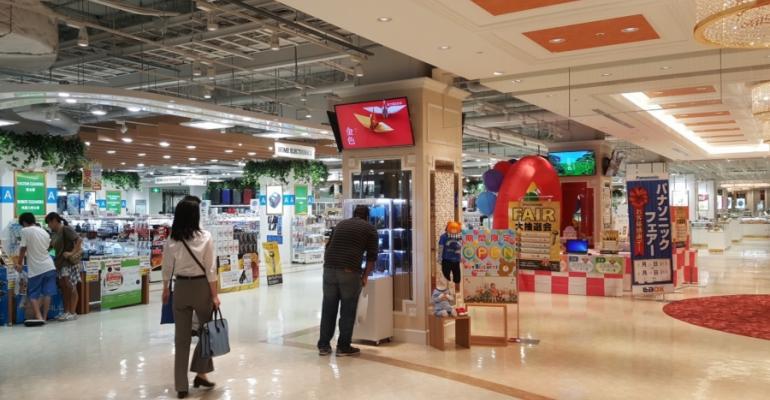 Rare sight in Fukuoka - a sparsely occupied Chinese duty-free shop (Photo: Jacintha Stepens)
The Japanese even have a buzzword word for it. 'Bakugai' means 'an explosion of shopping sprees by the Chinese.'

The China shopping explosion in Fukuoka is both boon and bane. Fukuoka's Hakata Port has set up a council covering inbound cruise tourism comprising cruise stakeholders, including international cruise lines and travel agencies.

With 350 calls this year, Fukuoka has become Japan's premier cruise port. It has seen an eight-fold increase in calls over 10 years. Along with this, Fukuoka has chalked up a dramatic influx of Chinese cruise tourists, and this is only set to grow.

Most ships coming from China are chartered cruises. The Chinese typically visit two sightseeing spots and then hit the duty-free shops.

As the weight of luggage on a cruise vessel is not restricted compared with air travel, they do a lot shopping.

According to Take Kimura, manager, cruise promotion at Fukuoka City's economy, tourism and culture bureau, a 2012 survey revealed 40 cruise ship calls from China generated some US$43m worth of shopping, with each Chinese passenger spending an average of US$1,391. So for an ex-China Voyager-class call, the passenger spend could be as high as US$1.5m. Singaporeans, who were found to be the next biggest shoppers, spend some US$90,505, according to the survey.

As lucrative as these figures sound, they belie some of the challenges Fukuoka faces: The attractions the Chinese visit are usually free spots and so there is little revenue earned. For instance, the 234mtr high Fukuoka Tower—Japan's tallest coastal tower with a magnificent view that overseas visitors get to see at a discounted US$6.50—is designated as a 10-minute stop by Chinese travel agents, Kimura noted.

The agents allow their tour groups to take photos outside the tower as a backdrop before herding them off for shopping, local sources said, adding this reportedly has to do with the guides earning their keep through kickbacks from the Chinese-run duty free shops, stocked with goods popular with Chinese consumers.

For Fukuoka residents there does not seem to be much of an economic upside to the bakugai, and the only visible increase impacting their lives is traffic congestion from tour buses, a local resident lamented.

The Hakata Port task force, set up last November, is already putting into place measures to alleviate problems and increase the positives of Chinese tourism in Fukuoka, Kimura said.

Because bus parking bays are insufficient, buses are now allowed only to drop passengers off at locations and return later to pick them up. A new navigation system helps to identify congestion and re-route buses. There will also be guidelines for shore excursions for more mutual benefit. The task force is planning a more diversified shore excursion to minimize crowding and maximize the experience.

Fukuoka has been a gateway to China for some 2,000 years. Cruise lines have been calling since 2008. The rapid increase in calls poses port infrastructure challenges, too. Fukuoka has three berths available for cruise ships and is receiving as many calls as it can for now. There are plans to develop facilities so that more vessels, including Quantum-class and, eventually, Oasis-class ships, can be accommodated.