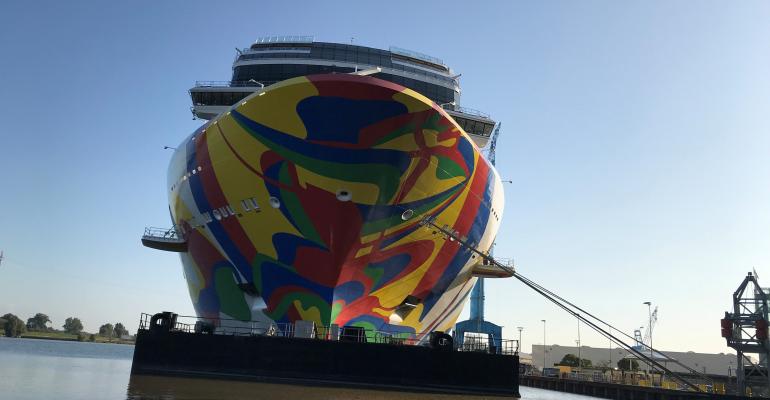 Norweigian Encore is in the final stages of completion at Meyer Werft
Cruise Line International Association (CLIA) hosted a special extended behind the scenes delegates tour of Meyer Werf Shipyard in Papenburg Germany on the eve of Seatrade Europe.

Norwegian Cruise Line’s Norwegian Encore, Royal Caribbean International’s Odyssey of the Seas, P&O Cruises Iona, Saga Cruises’ Spirit of Adventure and AIDA Cruises’ latest LNG fuelled ship next in class after AIDAnova were all in various stages of completion at the shipyard.

Meyer Werft has one of the biggest covered building halls in the world, a 514mtr drydock and private harbour.

The shipyard aims to assemble a single cruise ship in an 11-month period with the capacity to handle four ships at any one time, three in the drydock and one in the harbour, with two float-outs a year, and has a maximum production capacity of 420mtrs.

The shipyard is fully booked for new build orders until 2024 and has some 1,150 partner companies to assist with new builds.

The yard uses pre-fabricated blocks, which are added section by section to assemble ahips. During the tour of the production hall delegates were shown how large crane systems are used to position these blocks.

The shipyard works closely with customers to build to specification.

When asked about demand for ship size, Kruse responded: ‘The demand for medium sized vessels has dropped whilst orders for smaller and the largest ships has increased.’

Currently in the building hall, blocks for P&O Cruises’ Iona are under construction to build the 22-deck ship with a 5700-passenger capacity, expected to be floated out in February 2020. The ship will spend its maiden season in the Norwegian fjords.