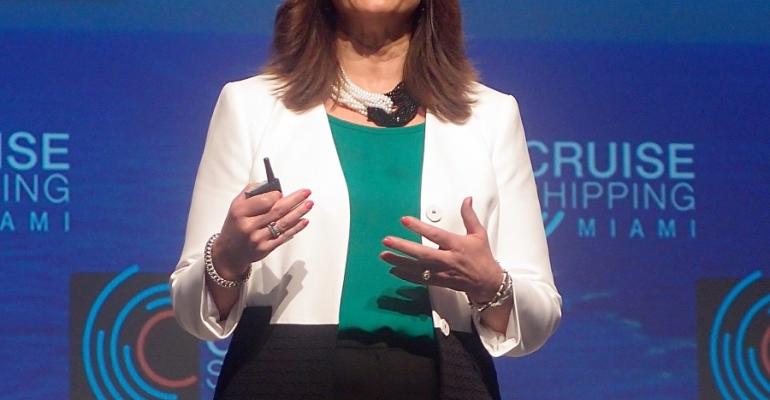 Duffy to assume role Feb. 1
Cruise Lines International Association's Christine Duffy has been named president of Carnival Cruise Lines, ending a search process that stretched nearly a year. An announcement had been expected this week.

She succeeds Gerry Cahill, who retired.

With 24 ships, Carnival is the largest of Carnival Corp. & plc's nine brands, and this makes Duffy cruising's most senior female executive.

She will take the role Feb. 1, reporting to Arnold Donald, ceo of Carnival Corp. & plc.

For the past four years, Duffy has led CLIA as president and chief executive, engineering dramatic changes and managing the association's transformation into a global organization. During most of that time, she reported to CLIA chairman Howard Frank, the former long-time vice chairman and chief operating officer for Carnival Corp. & plc.

'Christine is one of the most respected and dynamic leaders in the travel industry,' Donald said, adding that Duffy brings a wealth of experience.

She has more than 30 years of travel industry background, and started her career as a travel agent in Philadelphia at McGettigan Partners. Before taking the CLIA reins in 2010, she served as president and ceo of Maritz Travel, the largest corporate meeting, incentive and event company in the world, from 2004 to 2010.

Duffy serves on various travel industry boards including the US Travel Association, the advisory board for Starwood Hotels and the board of Visit Florida. In 2001, she founded Meeting Professionals International's Women's Leadership Initiative. She also is a member of The Committee of 200, an organization of women business leaders that supports women's leadership in business and works to ensure women will continue to take on more significant and visible leadership roles.

Carnival had looked both inside and outside the cruise business to fill this important role. Cahill, who led the brand since 2007, had informed the company of his desire to retire some time ago, but was talked into staying longer. His last day was Nov. 30.