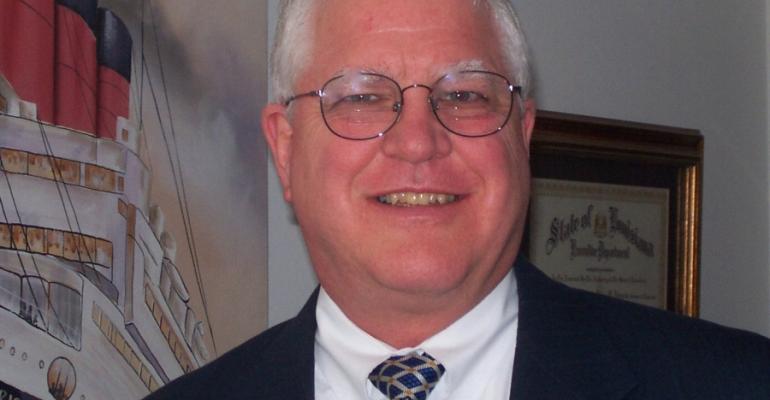 Ted Thompson - Cruise industry is 'making improvements. It's certainly a better industry than it was 20 years ago when I joined it'

After decades of advancing maritime safety, environmental operations and passenger vessel accessibility, Capt. Ted Thompson is retiring. This week he wrapped up 19 years with Cruise Lines International Association and its predecessor, International Council of Cruise Lines. That followed 27 years with the US Coast Guard, where he specialized in safety, security and environmental protection.

'It was a true pleasure and honor for me to work with someone as dedicated and professional as Ted Thompson,' said CLIA's Bud Darr, svp technical and regulatory affairs. 'He served as both a trusted colleague and mentor to many in our industry, myself included.'

With advanced degrees in nuclear engineering and naval architecture, Thompson had 'a tremendous level of technical expertise to complement his deep commitment to safety culture,' Darr said.

He added that Thompson deserves gratitude for his 'countless and substantial contributions to safety, security and environmental protection.'

Thompson himself thinks the biggest impact he's had is to educate IMO delegates and USCG to develop 'a good, solid regulatory environment without going over the top ... without making a gold-plated Cadillac.'

Any achievements were teamwork, he said, crediting 'giants' like Holland America Line's René Roussel, Princess Cruises' David Brown and Paul Debham and Carnival Corp. & plc/Costa's Tom Strang. 'There were a lot of people who were very active in educating me, and I was a very effective mouthpiece,' as Thompson put it.

For the past three years he has worked half time as senior technical adviser to CLIA. Earlier he served as evp and svp technical and regulatory affairs and vp operations. His CLIA/ICCL career followed 27 years with the USCG—31 years counting his USCG Academy studies. He retired from USCG as the commanding officer for the Marine Safety Office, New Orleans.

In the late 1990s, IMO started to focus on large passenger vessel safety, and a USCG study made recommendations. Working with the shipyards, classification societies and the CLIA/ICCL technical committee, Thompson's group came up with eight or nine recommendations to IMO. Most were adopted into regulation.

'The major regulatory things, in my view, all came from things the cruise industry submitted,' Thompson said.

For example, an on-board safety center, Safe Return to Port standards (requiring redundancies for the propulsion and steering system so that fire or flooding in one compartment would not prevent a ship from safely returning to shore), computer programs to assist masters in assessing damage stability, damage and sounding indication sensors in compartments that alert the level of flooding, emergency lights in passenger cabins in the event of a power failure, and the demonstrated capability to recover persons from the sea, even by rescue ships with high freeboards.

CLIA/ICCL also recommended every line develop a drug and alcohol policy for seafarers. While IMO hasn't adopted that, CLIA made this a requirement for its membership.

Though IMO had bridge resource management requirements, CLIA advocated extending those to the engine room, and that each ship have a shoreside emergency operations center.

'Back in 1999, we started thinking of industry policies for waste management procedures, additional life jackets and the carriage of infant life jackets,' Thompson said. These are things IMO subsequently approved.

'Back then, we made these things mandatory with the expectation you put those into the shipboard management plan which is mandatory and subject to audit,' he noted.

Following the Costa Concordia grounding, the cruise industry put forward additional best practices that CLIA made mandatory for members, subject to verification by their classification society and by each company's chief executive.

Passenger vessel accessibility has been an issue since the Americans with Disabilities Act of 1990. An ADA lawsuit involving Norwegian Cruise Line went all the way to the Supreme Court. In 1998, the Access Board started the regulatory process on passenger vessels of all sizes. Thompson has been involved ever since in an issue he called 'a very important time commitment of my job for the last 16 years.'

Access Board members have visited cruise ships and traveled underway, interviewing crew who assist disabled passengers, inspecting amenities and observing challenges such as certain doors that international safety regulations require to be watertight so they have sills.

'We've been involved with educating folks—the Coast Guard and others. We're trying to work out regulations to provide a reasonable solution to compliance,' Thompson said. Comments to proposed rulemaking were due last January and there were so many areas—42 questions—that he thinks it would be hard to go to a final rule without giving industry the opportunity to comment on how the questions were answered.

Today's cruise ships have many more accessible staterooms and features than in the past, but there are still safety and construction-related limits to what can be done on a ship compared to ashore. Some IMO regulations conflict with the Access Board rules.

The cruise industry is concerned about the possibility that twice the number of accessible rooms needed may be required. It takes three regular staterooms to make two accessible rooms, so for every two rooms for disabled cruisers, one room is lost forever, Thompson explained. If 200 accessible rooms are mandated, 100 regular rooms are lost. Industry studies show the utilization of disabled rooms is not as high as regulators may think.

It's challenging to retrofit ships for accessibility; the changes ought to be made in the design phase. CLIA member lines are watching the rulemaking closely and trying to incorporate what they can into newbuild designs now.

Thompson said Bud Darr has brought to CLIA some 'very knowledgeable and very capable' staff, including Kristin del Valle, Rob Griffiths and Kim Hall. Thompson has been mentoring del Valle, particularly concerning the Polar Code, where work began in 1998, and others so he can hand off his portfolio.

'The cruise industry is making great strides,' Thompson said of CLIA's development. When ICCL and CLIA merged some years ago, he had told executive committee chairman Richard Fain this was 'an excellent opportunity' for CLIA to become a global organization. It took time, but that has happened.

'As a global organization, you have to send a consistent message. The industry has to be forthcoming so as not to engender mistrust ... It's good for the industry to speak with one voice when coming up with policies,' Thompson said.

And compared to when he began working in the cruise arena, at the time Carnival Ecstasy caught fire off Miami Beach, the industry has become more transparent, he said.

Educating the public and regulators remains a challenge, though. Just this week, a New York Times opinion piece, 'Cruise Ships are Unregulated Trouble on the High Seas,' cited the controversial Friends of the Earth 'Cruise Report Card' which gave all cruise lines an 'F' for transparency in 2014. As reported here, after years of disputing what operators view as the 'highly flawed methodology used to interpret data and the overall presentation of information in the final report,' CLIA opted out of the survey.

'There are claims made by some of these organizations that just aren't true,' Thompson said. 'Maybe 20 years ago, but not now.'

The New York Times piece is 'an example we still have a lot of work to do in educating people to the reality of the industry,' he added.

The notion that cruising is unregulated is 'absolutely false,' Thompson said. 'It's probably one of the most regulated industries in the world.' Yet the mainstream media don't understand that or fail to report it. Instead, the story is typically that the cruise industry does only what's required by law.

Yet, as Thompson noted, in the case of large passenger vessel safety and other areas, CLIA/ICCL made many of the recommendations that IMO eventually adopted into regulation.

'I think the industry is on a good course,' Thompson summed up. 'They're making improvements. It's certainly a better industry than it was 20 years ago when I joined it.' Identifying best practices—one function of the external safety advisory board set up post-Costa Concordia—is a good course, he added, because operators can implement those much faster than regulations can be adopted.

CLIA recognized Thompson at the association's annual Leadership Forum in Miami in November. His last day was Dec. 31.