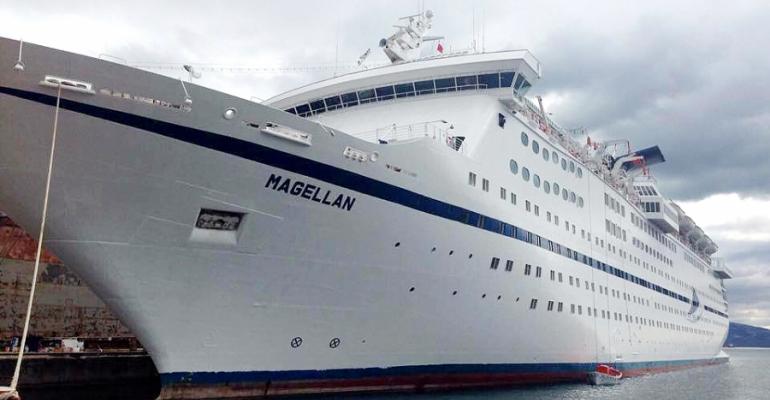 British based Cruise & Maritime Voyages launched its first 'round the world cruise aboard flagship Magellan. The voyage lasts for 120 days visiting 43 ports of call.

Magellan will set sail from London Tilbury on January 5, 2017, circumnavigating the globe cruising via the West Indies, Panama Canal, French Polynesia, Australasia, South East Asia and the Far East, India, the Red Sea, Suez Canal and the Holy Land and Med before returning to Tilbury on May 5.

Early booking twin saver fares represent savings of up to 40% and start from £8,999 or £75 per person per night with a reduced 25% single supplement on superior grades starting from £13,629.

Chris Coates, commercial director commented, 'The introduction of Magellan in 2015 has considerably broadened CMV’s market appeal and level of interest for our product with record sales achieved this year. Magellan at 46,052gt and carrying about 1,250 passengers accommodated in 726 cabins is the perfect sized vessel for this special long haul itinerary. Her generous passenger space ratios with spacious lounges and public areas, three dining venues and extensive deck space and observation points, make her ideal for round the world cruising.

The 21,000gt, 600 passenger Astor sets sail from London Tilbury on October 16, 2016 on a 46 night voyage via the West Indies, Panama Canal, French Polynesia and New Zealand arriving in Sydney on December 1, with the option to return on Magellan’s northbound World Cruise voyage from Sydney on February 23, 2017 via the Far East and Suez Canal.

Alternatively, anyone wishing to sail with Magellan on a 49 night southbound world cruise from London Tilbury arriving in Sydney on February 23, 2107, has the the option to return on Astor’s northbound voyage via South Africa from Fremantle on March 15, 2017 before returning to London Tilbury on April 23, 2017. Combination early booking fares start from £6,079 or £69 per person per night for an 88 night voyage combination with the chance to spend three weeks in Australia.