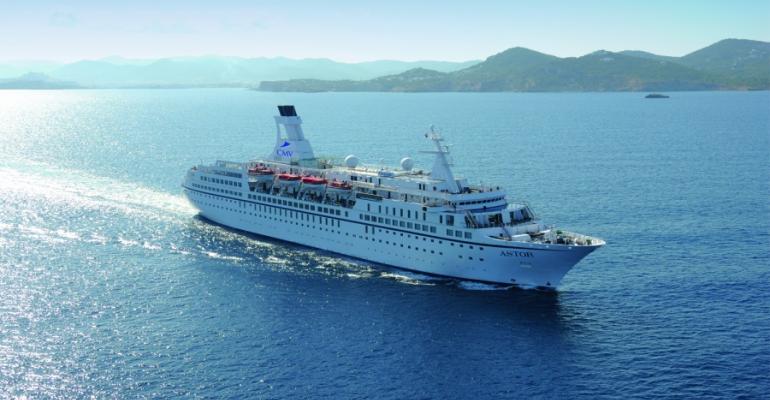 Global Maritime Group, parent company of Cruise & Maritime Voyages, has acquired the 600-passenger Astor which arrives in Fremantle on Saturday to commence her second extended season.

As previously reported, Astor joined the CMV fleet in December 2013 under a long-term bareboat charter arrangement with Munich-based Premicon which declared insolvency in November 2014.

‘The acquisition of Astor is another important milestone in the strategic development of the Group’s presence in the international market,’ CMV chairman and ceo, Christian Verhounig, said.

Astor will depart Fremantle on March 16, 2015 on a 38-night repositioning cruise, arriving in Tilbury on April 23. She will continue to operate a season of ex-Kiel and Bremerhaven cruises for the German market under the TransOcean brand.

‘We have already committed to returning for a third (Australian) summer and are delighted to announce Astor’s voyage in 2015 from London to Fremantle, departing October 17, 2015, will be via the Caribbean, Panama Canal, Acapulco, Tahiti and Sydney.’

Hunter was md of Classic International Cruises Australia from 2004, when Funchal operated the company’s first season ex-Fremantle, until it collapsed following the arrest of Athena in Marseille in September 2012.

He worked incredibly hard in building up the market and was on the brink of operating CIC’s ninth 2012/13 consecutive season from Fremantle when Athena was impounded.

Chris Coates, UK-based commercial director CMV added, 'Astor has added 22,000 passengers to our global carryings and since her introduction has proved a firm favourite with high levels of customer satisfaction and repeat business being achieved. Next year we have programmed a special eight night ex-London Tilbury Round Britain cruise before Astor starts her German market season and forward booking levels are very encouraging.'