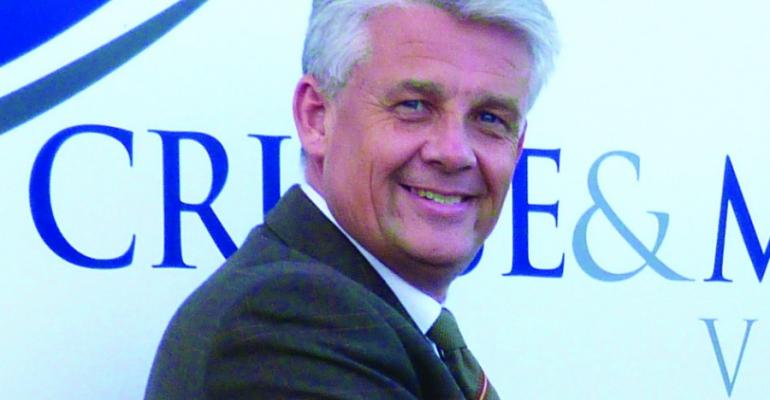 As 2014 draws to a close, Chris Coates, commercial director of Cruise & Maritime Voyages, took time out of his hectic schedule to reflect on how the British-based operator has expanded these past twelve months in both the ocean and river sectors.

The year got off to a flying start, recounts Coates to Seatrade Insider, as CMV announced the take-over of the tour operation of TransOcean Kreuzfahrten and entry into the expanding German market.

As part of the deal with Munich based Premicon AG, CMV assumed charter, operation and marketing of the premium rated 600-passenger Astor including her summer 2014 ex-Kiel, Bremerhaven and Hamburg.

Fast forward to last month and it was announced Global Maritime Group, parent company of Cruise & Maritime Voyages, had acquired Astor which is currently sailing her second season in  Australia but will return to the German market next spring after a special one off ex-UK Round Britain cruise for the British market.

Other 2014 milestones, informs Coates, were the launch of Marco Polo’s 50th anniversary programme including a 34 day Canada and Greenland voyage retracing the ship’s maiden voyage as Alexandr Pushkin, which was sold out within days, he commented.

Other fleet additions include a 2.5 year bareboat charter of Azores from Portuscale until October 2017, and the addition of Magallen (the former Grand Holiday), which joins the fleet in March 2015.

‘1,400-passenger Magellan provides us with a different option than the smaller 800 pax Marco Polo and 600 pax Azores and Astor,’ Coates explained. He said the company has taken bookings for 18,000 UK passengers in the past six weeks, across the whole fleet.

‘It has brought CMV to a wider audience,’ he noted, adding bookings are coming from regular CMV customers as well as other ex-UK cruisers from other brands.

Next winter 2016, Magellan will undertake a 42-night Amazon sailing out of Tilbury while Marco Polo switches to Bristol for a 54-day cruise to South America.

Coates says Astor’s voyages to and from Australia 2015/16 are proving very popular with the ship arriving in Australia just before Christmas and after spending 12 weeks cruising around the continent, then heads back to the UK.

‘It is in effect a world cruise with a  lengthy stayover enabling our customers to spend three months Down Under which no one else offers,’ Coates commented.

‘We are finding a big demand from those with families living in Australia who want to go and visit for a while but do not want to fly.’

The programme features a 45 day sailing UK to Sydney, via the Panama Canal or 54 days onto Freemantle, and a 38 day return voyage via the Cape.  It is possible to buy individual legs or both. Anyone booking before end Feb 2015 will get a Buy-One-Get-One-Free offer as well as a 10% combination discount.

In 2015, CMV is anticipating carrying 68,000 UK cruisers (from eight regional ports) on it four ships, whilst globally including Germany, Australia and river cruising, the figure is in the 115,000 passenger region.

From nowhere in 2010, CMV’s fleet has grown to four ocean ships and three river ships and five offices worldwide in UK, Germany Australia, US and Greece with around 150 shoreside employees.

The company is 50% owned by Greece’s Global Maritime Group and 50% by management plus one private investor. The Greek parent undertakes all ship management in-house.

‘Regional cruising is a big contributing factor to our success and we are always looking to grow the list of homeports which includes five in England and three  in Scotland,’ Coates said.

CMV passengers are on average aged about 60, mainly retired couples although with Magellan we have seen a slight dip in customer age to around the mid-50s, he added.