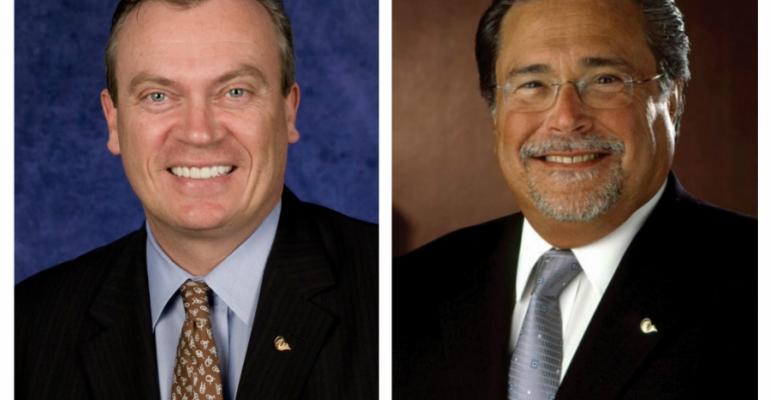 Stein Kruse, left, joined Carnival Corp.'s five named officers, while Micky Arison, for the first time, is not in that group

Arnold Donald, president and ceo of Carnival Corp. & plc, received compensation valued at nearly $9.4m in 2015, up from $8.7m the year before. For the first time in a proxy, chairman Micky Arison was not among the company's five named officers, while Holland America Group ceo Stein Kruse entered the top five in compensation.

Carnival is required to disclose the compensation of its ceo, cfo and the other three most highly paid officers. Given that Arison is no longer chief executive and his compensation doesn't put him among the three other best paid executives, he's not among the five named officers for 2015.

Since he's a director, though, Arison's compensation was reported, and the proxy showed he received $1m for his services as executive chairman, plus $210,000 in other compensation consisting of reimbursement for spousal travel.

Donald's salary stayed flat at $1m, and stock awards were again valued at $3.5m. His non-equity compensation, though, was higher, $4.6m, up from $3.9m. Other compensation of $227,000 included, mainly, personal use of the company's aircrafts, as well as items such as health insurance, other personal travel and a car lease.

The second highest compensated executive, chief operations officer Alan Buckelew, received a total package valued at $4.7m, down from $6m in 2014. His salary stayed flat at $825,000, but stock rewards were lower (under $1.6m, compared to $3.4m), while non-equity incentive compensation was higher. Other compensation was $416,000, the bulk in lieu of a savings plan profit sharing contribution, but also items like health insurance and a car lease.

The executive compensation is in a proxy in advance of Carnival Corp. & plc's joint annual shareholders meetings set for April 14 in New York.

The proxy stated Carnival's corporate government guidelines dictate that diversity should be considered by the nominating and governance committees. Currently, two of nine, or 22% of the directors, are women. The boards have expressed their intent to fill the next vacancy with a female candidate, where skill set and experience for the vacancy can be met to achieve a target of 25% female board members.