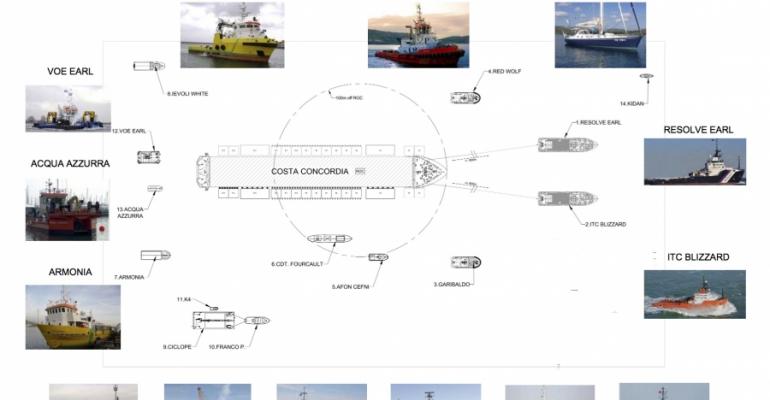 A flotilla of boats—from tugs and spill recovery vessels to a sailboat carrying marine mammal observers—will accompany the Concordia wreck to its final destination: Genoa, for scrapping. A French navy ship is to monitor part of the journey. The departure from Giglio has been delayed until Wednesday.

After refloating operations continued overnight Sunday, the wreck has emerged about 11 meters, with three more to go to reach the required draft. The bow of the ship has surfaced for the first time since Costa Concordia sank in January two years ago. The wreck is to be refloated to the Deck 3 level.

Strong winds overnight slowed the work, and weather contributed to the decision to delay departure from Monday until Tuesday and, then, Wednesday.

Italy's ANSA news service said it came out, for the first time, that there's a 'Plan B' for the transit. In case the weather worsens while the transit is underway, the convoy would head closer to shore, stopping temporarily in a place such as Livorno or Le Spezia, but remaining offshore, not entering any port.

In addition, ANSA said a French navy ship specialized in pollution response will sail with the convoy as it passes upper Corsica.

No fewer than 14 vessels are to make up the core Genoa convoy, with Blizzard serving as the lead towing tug and Resolve Earl as the main towing tug. Blizzard has 140 tons of bollard pull, and Resolve Earl has 135 BP. Each tug is 2,311gt and nearly 70 meters long.

Stationed behind the towing tugs and flanking the wreck, Red Wolf and Garibaldo will serve as escort/firefighting tugs.

The tug Afon Cefni will provide environmental monitoring/caretaking, while the helicopter-equipped multipurpose vessel Fourcault will house the technicians.

The crane pontoon Ciclop, the staging vessel for divers/monitoring, will be towed by the tug Franco P.

Motorboat K4 will provide monitoring and personnel transfer, while tug Voe Earl will serve as a multipurpose/monitoring vessel. The skimming vessel Acqua Azzura will monitor and recover any floating debris.

Out front will be the sailboat Kidan, carrying marine mammal observers and equipped with Repcet satellite equipment to monitor cetaceans' presence.

Vessels involved in the operation are registered in Vanuatu, the Netherlands, UK, Spain, Panama and Italy.

Concordia will be broken in a port near Genoa by a consortium including oil services company Saipem and Genoa-based shipyards T. Mariotti and San Giorgio del Porto. It is estimated the scrapping, including recycling, will take 22 months.