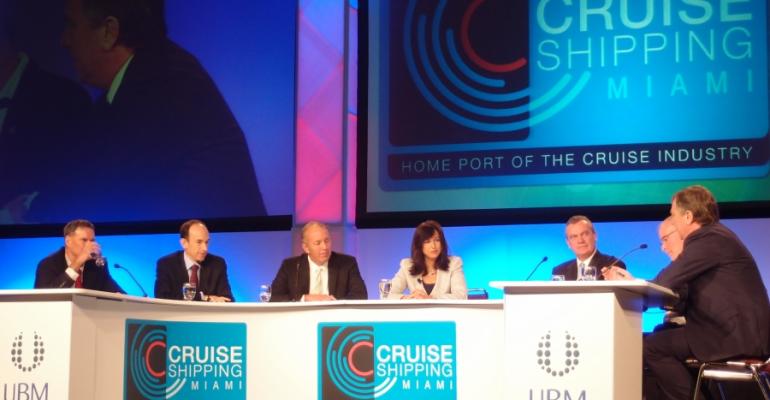 State of the Industry - focus on safety

Not surprisingly Costa Concordia dominated Cruise Shipping Miami’s State of the Industry panel but the discussion—about safety, environmental practices and corporate citizenship—seemed targeted at a more general audience than those in the room. Cruise lines were clearly eager to present a responsible and capable united front to the public and regulators at this time, more than ever before.

‘The industry is fundamentally very safe. We just need to do a better job of communicating that,’ concluded Stein Kruse, president and ceo of Holland America Line. He added: ‘We are an incredibly regulated industry.’

Pierfrancesco Vago, ceo of MSC Cruises, chipped in that ‘despite what the House and Senate may think,’ the European Union has its own regulations addressing safety and environmental issues that ‘go far beyond the IMO.’

The executives also touted their corporate responsibility and environmental efforts.

Royal Caribbean International president and ceo Adam Goldstein stressed the cruise industry has staying power on matters from providing earthquake relief in Haiti to striving for better wastewater management ‘after the media moves on, whether people are looking or not.’

In the past, CSM’s premiere session delved into wave season and a wide range of industry matters. But with Costa Concordia, this is not a typical year.

The European economy and Concordia’s impact on business did come up, though perhaps less than if Carnival Corp. & plc’s Friday earnings report had not gone into detail on those topics.

Plus, Vago delightedly told the CSM audience: ‘I just bought a ship’—MSC today announcing it had finally reached a deal for MSC Preziosa at STX France.

Carnival Cruise Lines president and ceo Gerry Cahill said that in November, December and the first half of January, ‘I’ve never seen business as strong in the five years I’ve been ceo.’ He anticipated ‘a chance to get some pricing back that we lost in 2009.’

‘Most of our guests realize cruising is very safe. Others may be scared off,’ Cahill said, adding that Carnival halted its marketing for a good month. ‘We are back. It hasn’t been as draconian as people made it out to be,’ he said of the Concordia impact.

The Carnival brand took more bookings in January until now and at higher prices than last year, Cahill stated. ‘My forecast shows an increase in revenue yields for the year. I don’t think we’ll get as much pricing as we potentially would have.’

Dan Hanrahan, president and ceo of Celebrity Cruises, said his market research found no change in the level of ‘cruise rejecters’—people who have no interest in cruising—since Costa Concordia.

And Kevin Sheehan, president and ceo of Norwegian Cruise Line, reported no change in cancellation activity.

Globalization was briefly, but enthusiastically, discussed.

Pointing to the growing markets in Latin America, Europe and Asia, Goldstein referred to ‘a world that is catching on to cruising.’

It was fitting that Hong Kong sponsored the State of the Industry session, he said. In China alone, the amount of wealth in the coastal cities that are drive-to cruise markets and ‘a relatively favorable regulatory regime’ are factors that underlie Royal Caribbean’s decision to take Voyager of the Seas to Asia in 2012.

‘We still have a really big job to do in this industry,’ Goldstein added, citing the need to ‘cultivate the knowledge of travel agents internationally.’