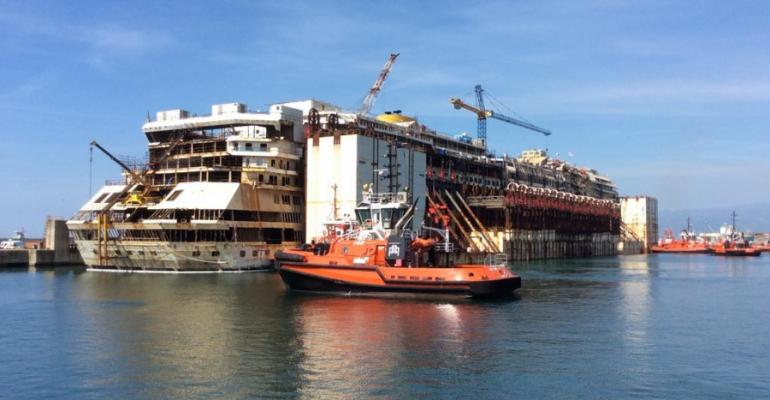 The Italian Coast Guard has given the green light and the ship recyling consortium of Saipem and San Giorgio del Porto has begun the operations to prepare the wreck for the transfer.

Phase 1 of the Concordia dismantling and recycling project has been completed, the ship recycling consortium said, with more than 5,700 tons of materials including furniture and internal structures having been removed to obtain the necessary draft of 15.35 metres to move the wreck from the breakwater of the Prà Voltri Port to the Genoa Ex Superbacino area.

RINA Services specialists have verified the suitability of the wreck for towing in specified wind and wave conditions at a maximum towing speed of 2 knots.

Preparations for the transfer by tugs began Monday morning, and the exit manoeuvres from Port of Prà were expected to begin at around 4:30 p.m. local time.

The convoy was to be composed by a total of 11 naval assets, including three tugs to execute the towing operation and one to follow. Other support ships are the Coast Guard, police and environmental monitoring and anti-pollution vessels. Water conditions were to be checked continuously, with the anti-pollution equipment ready to act if needed.

The wreck is floated by 30 sponsons, 15 on each side, managed by a compressed-air balancing system. The transfer distance of 10 miles from the entrance of Port of Prà to the eastern entrance of Genoa Port is expected to be covered in 11 hours during the night.

The navigation from outside Port of Prà was expected to begin at 8.30 p.m. when the convoy moves in a eastward direction parallel to the coast up to a point east of the Genoa Port entrance. The manoeuvres to enter into the port were planned to begin at 8.30 a.m. Tuesday.

Eight tugs are to assist in the restricted area in front of the Ex Superbacino area. Towing and berthing operations will be conducted by Rimorchiatori Riuniti’s Genoa Port towage service vessels.