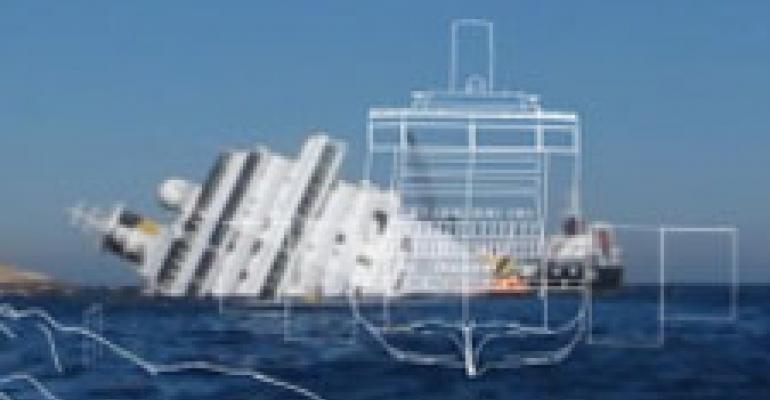 One year on from the Jan. 13 capsize off Giglio, the cost of Costa Concordia’s salvage has ballooned to $400m, eight people may face criminal charges, and compensation for most passengers and crew has been settled. A smaller number are pursuing legal action.

The highly complex removal of the wreck is now expected to cost $400m—a hefty $100m more than first estimated. Costa Concordia was built in 2006 for $565m.

The current timeline projects the ship will be gone by the end of summer, considerably later than originally outlined, and the Titan-Micoperi consortium continues to caution that weather and other factors may affect the schedule.

Early on, it was hoped the wreck could be refloated by this month, but in August that was revised to March or April, with the latest projection for the end of summer issued just weeks ago.

Work at the site goes on around the clock, seven days a week. Some 400 workers, engineers and divers are engaged, along with about 20 vessels. Last week, the ship’s iconic yellow funnel was removed to facilitate the completion of the inland holdback system that will help stabilize Concordia when it’s uprighted.

Turning to the criminal investigation, Capt. Francesco Schettino and as many as seven other crew and shoreside executives could face charges.

Italian prosecutor Francesco Verusio honed in on a dozen individuals out of the more than 200 people who were questioned. Based on recent statements by the prosecutor, three are expected to be cleared—cadet Salvatore Ursino, staff captain Roberto Bosio and Paolo Parodi, shoreside head of fleet maintenance. Safety trainer Andrea Bongiovanni may face a fine.

Those eight people had until this week to request further questioning or file briefs in their defense. Next, the prosecutor may formally request a trial for some or all.

The decision whether to pursue a trial will be made by a different magistrate at a preliminary hearing that could take place in March or April.

Of the 4,229 people on board Costa Concordia at its demise, 32 died and 159 were hospitalized.

The company has offered compensation to the families of those who died and the 124 passengers who needed medical care on site based on individual circumstances. As of last month, 60% of the injured had accepted or plan to accept the offer, according to Costa.

Of those who were hospitalized, very few legal actions have been filed. No survivors of the deceased are pursuing claims.

The ship was carrying 3,206 passengers, and 1,023 crew. Of the 3,055 passengers who survived and were not physically injured, 70% have accepted Costa’s offered compensation or alternative proposals. The company has been notified that about 10% are pursuing legal action, while 20% have not made their decision known.

Most of the US court filings involve non-US citizens who believe a stateside judgment may be more favorable. However, in the first legal decision related to Costa Concordia, a federal court in Florida last September dismissed a suit filed by several Giglio businesses seeking damages related to the sinking. The judge said Italy was a more appropriate venue for the action.

About 93% of the the crew have accepted the compensation offered by Costa, and very few crew are pursuing legal claims. The company said about 80% of the crew who were on Concordia have gone to work aboard other ships in the fleet.