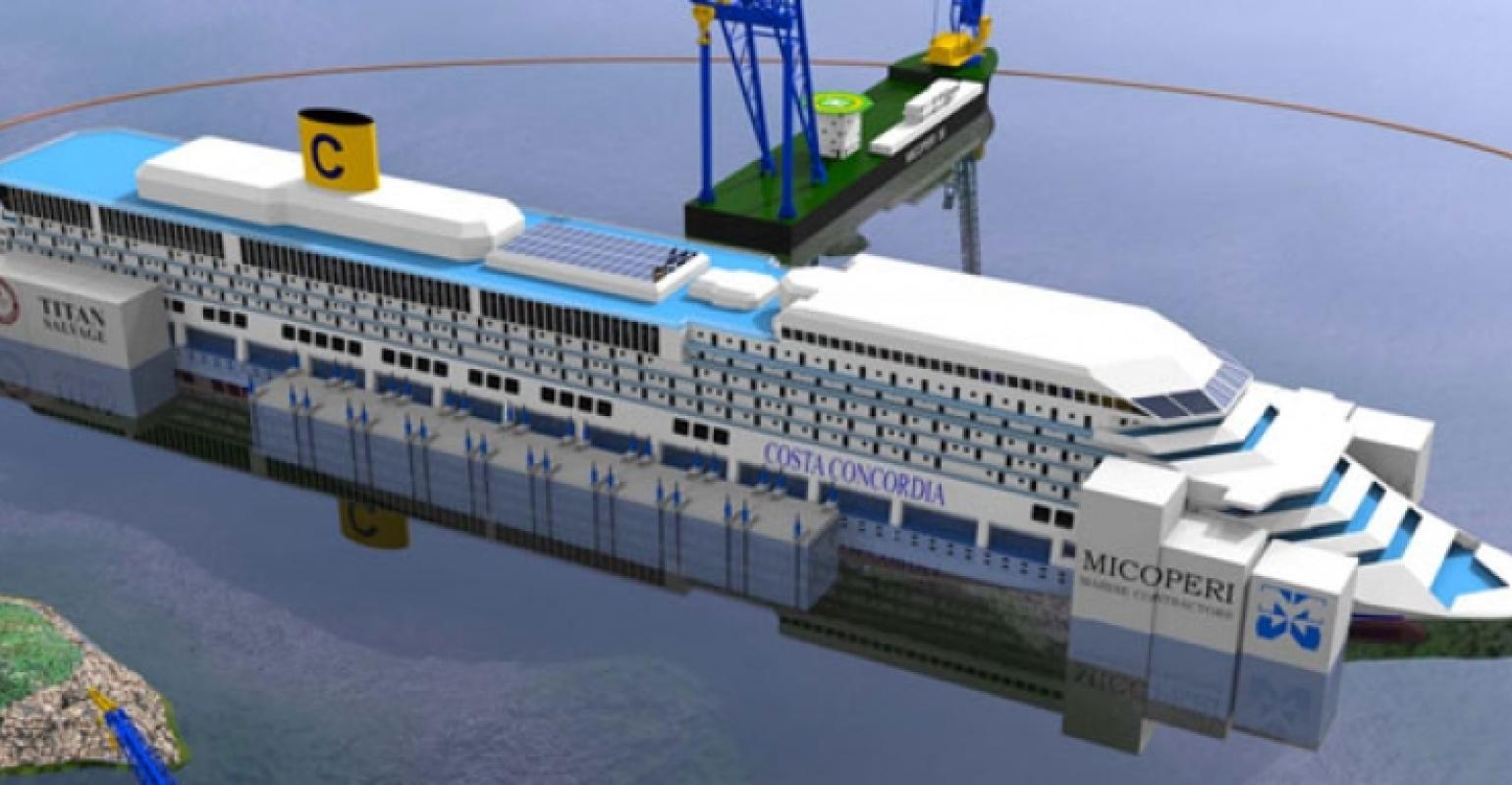 Rendering depicts the wreck after refloating, an operation scheduled to begin in about two weeks
The removal of Costa Concordia from Giglio may be nearing its final phase, but once the wreck is refloated and towed to Genoa, the dismantling is projected to stretch nearly two years.

Titan Micoperi workers on Tuesday were installing the second to last of 30 sponsons needed for the refloating.

Concordia is resting on a platform drilled into the seabed. During the refloating, planned to start in about two weeks, the sponsons will be gradually emptied of ballast water via a pneumatic system that provides thrust to push up the vessel. About 18 meters of the hull are expected to remain submerged.

The wreck will be towed to the port of Genoa Voltri under Titan Micoperi's direction. It will travel a distance of about 190 nautical miles at an average speed of two knots, taking an estimated four days. The transit has been carefully planned to fall within a period that historically presents the best sea and weather conditions.

Since the tow will be within Italy, the semi-submersible heavy lift ship, Dockwise Vanguard, that had been secured as an alternative in the case of long distance transportation, will not be needed, a Costa Crociere spokeswoman told Seatrade Insider.

Environmental protection is the top priority, according to Costa and the salvage consortium. The ship will be escorted by other vessels with equipment and specialized personnel on board including a team of marine biology experts.

Saipem, the oil and gas industry giant that is part of the state-owned ENI Group, a leader in engineering and environmental projects, will handle the environmental aspects of the ship's breaking.

The work will be carried out at San Giorgio del Porto, a facility that dates back to 1928 and which is the first shipyard in Italy to be included in the Special Register of Environmental Ship Reclamation & Recycling Facilities.

The Saipem/San Giorgio del Porto plan for dismantling and recycling Concordia will be carried out in four phases, expected to total 22 months.

First, Genoa Voltri will be readied to receive the vessel and perform initial breaking activities including stripping the interior furnishings and fittings on the decks above water. In the second phase the wreck will be transferred from the Voltri breakwater to the Molo Ex Superbacino dock, where the structures of Decks 14 to 2 will be dismantled.

The third phase will consist of preparatory activities for transfer of the wreck to Drydock No. 4. At this stage the sponsons will be removed and the food store rooms and cold storage rooms on the lowest deck will be cleaned.

In the fourth and final phase, operations will be carried out in a segregated area of Drydock No. 4 with complete disassembly of the wreck, including removal of the remaining interior fittings, clean-up and demolition of all remaining structures. This phase is to conclude with the proper handling, disposal and recycling of the materials.