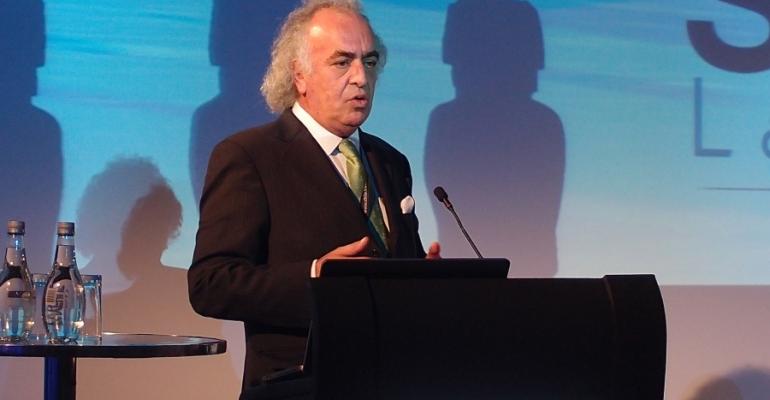 Montero - 'great ambassador for Chile and Latin America to the cruise industry.' He is pictured addressing Seatrade Latin America, an event he was instrumental in bringing to Valparaíso in 2013

Davagnino was elected to a two-year term during Conosur's recent board meeting in Punta Arenas. Ignacio Covacevich, general manager of Southern Port Co., will continue as VP, while the second VP position is unclear since Montero, who was elected to that post, is exiting the Port of Arica following Chile's recent change in government.

The new board's election follows a successful 2013, marked by the recovery of Chile's cruise industry and the prominent role of the Seatrade Latin America Cruise Convention in Valparaíso.

'The corporation has positioned itself as a valid player in cruise tourism in Chile and Latin America,' he said, 'and has had remarkable achievements in recent years.' Keeping in mind the market's numerous challenges, Davagnino pledged to continue working with the board 'to advance the development and strengthening of this industry in the country, with each of the port cities that make up this important corporation.'

The new president also credited Montero, who served two consecutive terms at Conosur's helm, for 'giving a major boost through the development of Seatrade Latin America in Chile in 2013 and attracting new cruise companies.'

Montero thanked Conosur for its support and recounted how the corporation urged legal measures to reduce lighthouse dues and allow coastwise casino operations on board cruise ships—measures that won back the cruise lines by addressing their cost and revenue issues. He also worked on a strategy to liberalize cabotage to foster the foreign-flag cruise business without harming national shipping companies and played a role in Norwegian Cruise Line's decision to return to Chile for the 2015/16 season.

Seatrade Communications chairman Chris Hayman on Friday called Montero 'a great ambassador for Chile and for Latin America to the cruise industry,' adding: 'His enthusiasm and energy were vital to the success of the Seatrade Latin America cruise event in Valparaíso last year, and his warm personality makes him a pleasure to work with.'