Construction of New West Port in Denmark's Kalundborg has begun 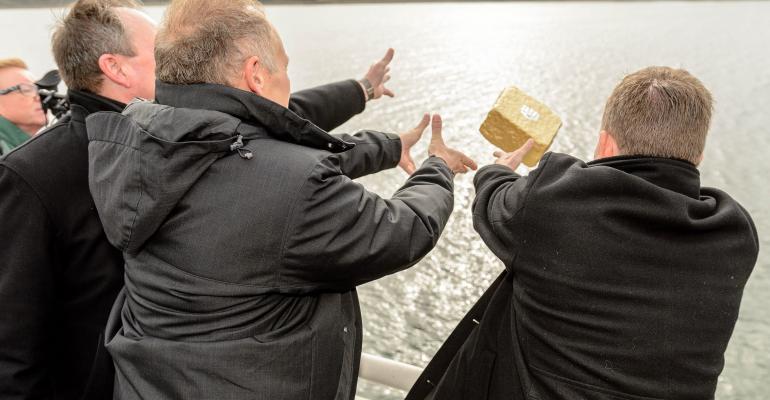 The gold-plated stone is thrown over the railing by mayor Martin Damm in partnership with port director Bent Rasmussen and chairman Jakob Beck Jensen from Kalundborg Port
At a sod-turning ceremony the first stone in the construction of the 330,000sq mtr new port area in Kalundborg has been thrown into Kalundborg Fjord.

The gold-plated stone was thrown over the railing by mayor Martin Damm in partnership with port director Bent Rasmussen and chairman of the port of Kalundborg, Jakob Beck Jensen.

The three gentlemen threw the stone from the Samsø Ferry to mark the beginning of the construction of New West Port.

'It is a big day for Kalundborg and I am feeling very positive about the expansion of the port. This will create new jobs, a stronger business cluster and increased settlements for the benefit of the entire municipality,’ said Martin Damm, the mayor of Kalundborg.

New West Port will initially count 330,000 sq mtr, which will contain, among other things, a container terminal and a 500mtr quay and will have a water depth of 15mtr.

The port is looking to attract cruise business as well. It is making a significant investment in expanded port infrastructure to attract homeporting for large cruise ships as well as partnering with two service providers Blue Water Shipping and PWL Port Services to target more business.

Port of Kalundborg claims to be the only port on Zealand to oﬀer deep water at the quay immediately next to the T-route, the deep water route connecting the Baltic Sea and the North Sea.

'If Kalundborg is to be attractive for port-using businesses and the larger cruise ships of the future we need the new space,’ said Jensen.

The Port of Kalundborg expects the port expansion to be completed in February 2019.