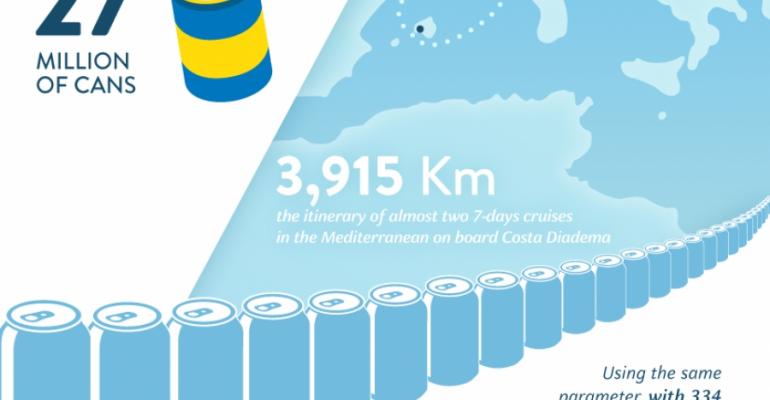 The 'Message in a can' project involves the recycling of aluminum beverage cans from Costa ships calling at Savona; an awareness campaign to extend this across the city and a photo-led social media awareness campaign, for which the best photograph will be rewarded with a Costa cruise for two people.

Minister of the Environment, Gianluca Galletti, said: 'The project to collect and recycle aluminum cans on board ships, successfully kicked off a few years ago thanks to collaboration between CIAL and Costa Cruises, has generated environmental and economic results and benefits.

Stefania Lallai, sustainability and external relations director of Costa Cruises, observed: 'Thanks to cooperation with CIAL and the Port Authority of Savona, we developed a project on board our ships that led to the recycling of 334 tons of aluminum in nine years. Our long-term objective is to extend this message of sustainability to the entire city of Savona and to an increasingly wider public, so it becomes an everyday practice.'

'The Port Authority of Savona is proud of this initiative, which is part of its policy of commitment to waste management in Savona-Vado port area. In 2007 we implemented a certified waste separation area, that is currently able to stock 79 different types of waste and separate for disposal and recycling 87% of total waste produced in the port area,' commented the port president Gian Luigi Miazza.