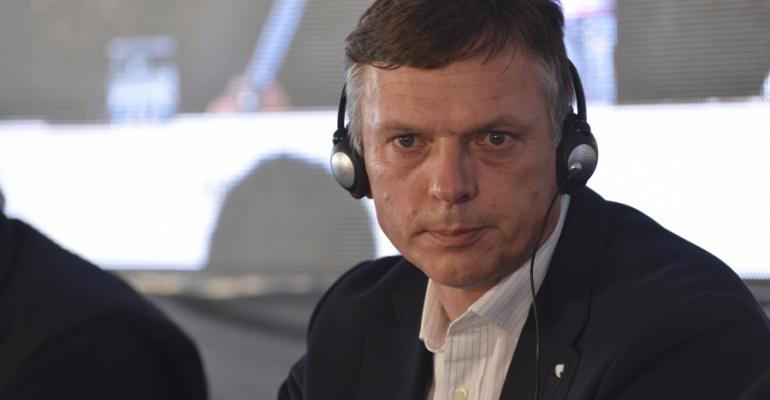 The Concordia wreck should be towed to Genoa for breaking, Costa Crociere argued forcefully at a Wednesday meeting in Rome that failed to reach an agreement on the destination for the vessel.

While 17 of the 19 parties at the Rome meeting agreed on Genoa, there was still support for Piombino, the nearest mainland port to Giglio. However, port improvements are needed there that would delay the removal.

The decision now goes to Italy's Council of Ministers and could come on Monday, according to the ANSA news agency.

Costa officials argued that Genoa is the only port in Italy where demolition and recycling activities can start immediately, adding that the Saipem/San Giorgio del Porto consortium there can assure 'the best possible technologies and environmental safety standards.'

'Our company wants to honor a precise commitment: to remove the wreck as soon as possible, in total safety and with the highest environmental standards. To reach this objective, we have turned to the best expertise, the most advanced technological solutions and unprecedented financial resources,' Costa ceo Michael Thamm said.

He added that the wreck will be ready to tow from Giglio in three weeks, a period that statistically presents the most favorable weather and sea conditions.

'Given this timeframe, the only solution is transporting the wreck to a place which is fully equipped for dismantling with the highest environmental standards,' Thamm concluded.

The Costa chief noted that so far, all the technical decisions Costa has made regarding the wreck have proven 'correct'—from the selection and assignment of the removal project to the Titan Micoperi consortium to the parbuckling last September.

'We believe we deserve the trust of the Italian authorities also for the final phase,' Thamm said, reiterating that Costa's sole aim is to 'close this project in the best possible way.'

Seventeen of the 19 ministries and public authorities that gave technical evaluations at the Conferenza dei Servizi Wednesday concurred with the selection of Genoa, which resulted from an international tender process launched in December that drew bids from as far away as China.

There has always been strong political pressure to keep the project in Italy. And selecting Piombino would give a lift to Tuscany, the region most impacted by the Concordia grounding.

'Piombino is not a valid alternative due to the substantial delays in operations to build port infrastructure,' Thamm said.

He added that the selection of Saipem/San Giorgio del Porto took into account technical considerations, the reliability and expertise of the companies and their workforces, the certainty and rapidity of outcome, and environmental sustainability in all phases.

Concordia is the biggest naval salvage operation in history.

Costa said the schedule projects the refloating can start by mid-July, pending approval from the Monitoring Observatory.