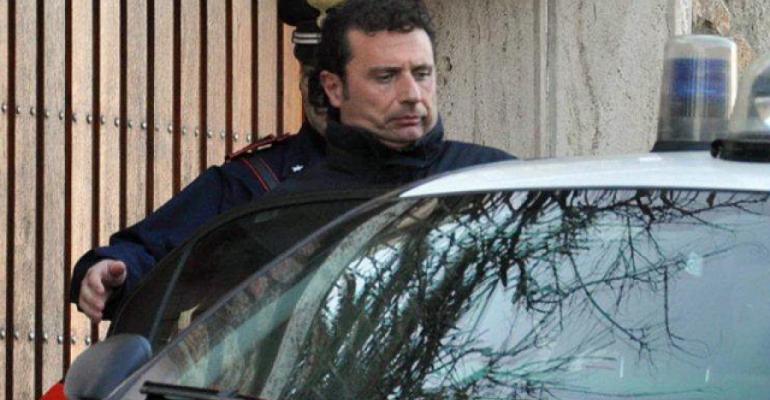 Capt. Francesco Schettino has been sentenced to 16 years in prison for his role in the deadly grounding of Costa Concordia. Thirty-two people died.

A court in Grosseto, Italy, on Wednesday found Schettino guilty of manslaughter, shipwreck and abandoning ship, according to the Associated Press and BBC News. Both agencies said the captain was not present when the verdict was read.

The BBC said 10 years was for multiple manslaughter, five years for causing the wreck and one year for abandoning the ship.

Earlier in the day, Schettino had tearfully claimed he was being made a scapegoat for the grounding on the rocks off Giglio Island the night of Jan. 13, 2012. He said he had been put through a 'media meat grinder' that 'distorted the reality and the facts.'

Throughout the two-year trial, Schettino argued Costa Crociere and subordinates on the bridge shared blame for the accident, and said his own actions had prevented further loss of life.

But it was the captain who commanded the risky, high-speed sail past Giglio and then delayed ordering the ship's evacuation. He got ashore while people were still trying to escape.

Television coverage of the verdict showed a judge reading the names of the victims—passengers and crew who drowned or were trapped in the submerged vessel.

Italy's ANSA news service said Schettino and Costa were ordered to pay €30,000 to each passenger registered as a civil plaintiff in the case. ANSA said these included Domnica Cemortan, the Moldovan dancer who was on the bridge at the time of the grounding and testified she was the captain's lover.

Schettino's trial got under way in July 2013. Earlier, four crew members and one shoreside Costa official got abbreviated sentences of up to 34 months in plea bargains, with some of the time suspended and some satisfied by community service. In April 2013, a judge fined Costa €1m in administrative sanctions related to the incident.