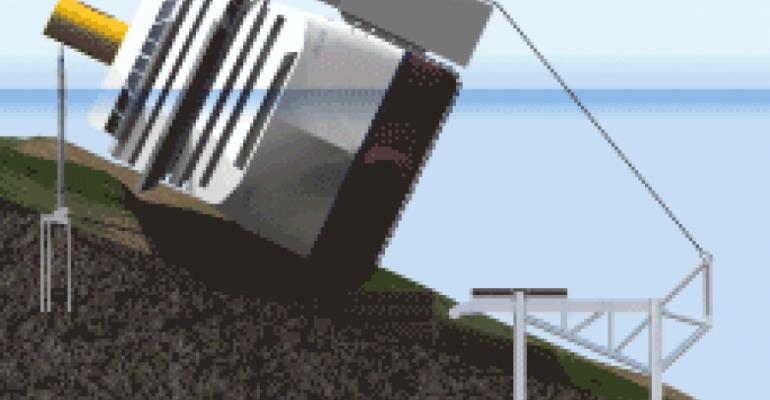 The wreck in position for parbuckling

Update provides more details on the three-phase parbuckling. The operation to upright Costa Concordia is set to begin early Monday morning, weather permitting, Italian authorities confirmed at a news conference in Rome on Thursday. The extremely delicate and challenging process to raise the ship is expected to take several days, and the wreck will remain at Giglio at least until the spring.

The work will be decided on a day by day basis depending on the weather conditions, which are critical, emergency commissioner Franco Gabrielli said.

'Extremely challenging' is how Nick Sloane, senior salvage master for the Titan-Micoperi consortium, described the project. He outlined a three-phase process to right Costa Concordia, which is lying 'finely balanced' on two spurs of granite.

In the first phase, the hull, which has molded itself into the rock, will need to be dislodged. Pulleys will slowly exert force in what will be one of the most delicate aspects of the entire recovery plan. The process must go very slowly to balance the force exerted so the hull is not placed under high stresses.

Then the wreck will be rotated using strong cables operated by strand jacks. These will gradually decrease their pull until the moment when the sponsons, attached to the side of the hull, reach sea level and can begin to be filled with water. This will occur after about the first 20 degrees of the ship's rotation.

In the third phase, as water fills the sponsons, the wreck will continue to rotate until it reaches an upright position. The ship needs to be rotated 65 degrees to become vertical.

It will rest on six steel underwater platforms.

The entire operation will be remotely controlled from the control room on board a nearby barge with commands and signals such as the opening and closing of sponson valves transmitted via two umbilicals (one, a redundant back-up).

Sloane, a captain with more than 27 years in the salvage and offshore oil and gas business, will lead the control room team.

Gabrielli said the wreck will remain in Giglio until at least the spring. After that, the 'natural destination' would be Piombino, the nearby mainland port that has served as a staging headquarters for some of the salvage work.

Other speakers at the news conference included Maria Sargentini, chair of the Monitoring Observatory, and Sergio Girotto, project manager, Micoperi.

Italy's Civil Protection Authority on Friday gave the go-ahead to begin the vertical rotation of the wreck.

Details of the parbuckling project are here.