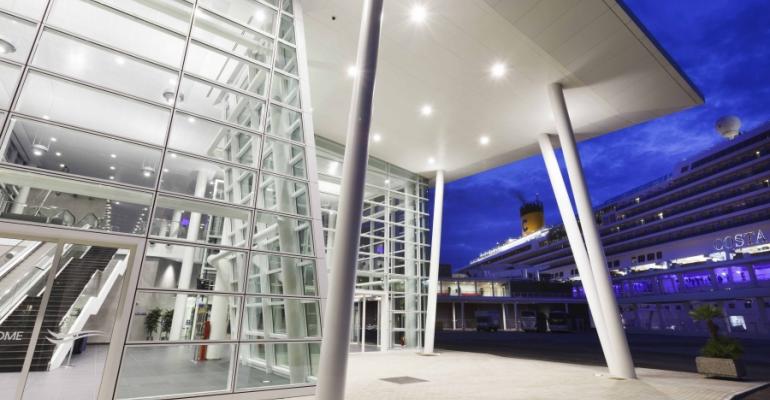 Costa Diadema's maiden call on Saturday officially opened the second passenger terminal at Savona's Palacrociere. The €9m facility will enable Costa to handle more than 1m passenger moves at the Italian port in 2015.

Costa Diadema arrived the morning after its christening at nearby Genoa to begin weekly calls on cruises that visit Marseille, Barcelona, Palma de Mallorca, Naples and La Spezia. A total of 60 calls are scheduled for the ship through 2015.

Costa's presence is expected to rise to 236 calls with more than 1m passenger movements next year, a slight increase over 2014.

The second terminal covers 3,000 square meters. It functions as a satellite, and is connected to the original Palacrociere but also able to operate as a free-standing facility with its own waiting, transit and baggage handling areas. There are separate facilities for police, the Guardia di Finanza and customs, too.

The second terminal increases Palacrociere's indoor space to 11,000 square meters, while the total area, indoors and out, covers 45,500 square meters.

The facility was designed by all Ligurian firms, including Studio Vicini Architetti's Luigi Vicini and Andrea Piazza, who also contributed to the designs of the original Palacrociere and Barcelona's Palacruceros; Studio Tecnico Ingg. Montaldo e Canale and C.V.D. Progetti Srl.

Costa ships began calling at Savona in 1996. The €3.6m Palacrociere was inaugurated Nov. 24, 2003. Costa co-financed and manages the facility.