Costa gears up for Diadema naming festivities in Genoa 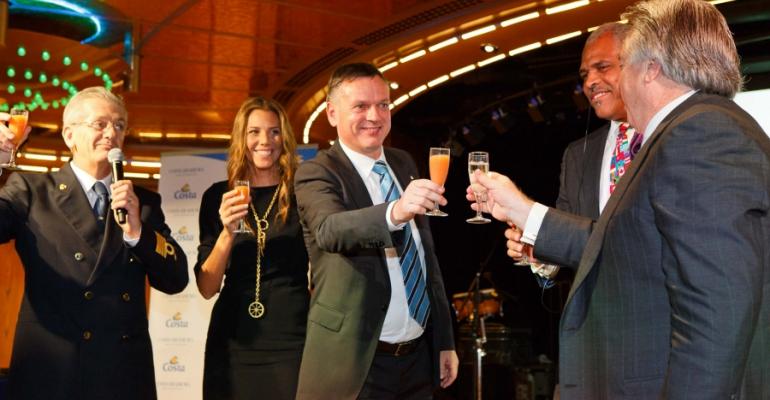 Celebrations for the christening of Costa Diadema began with the ship's arrival to Genoa on Friday following its vernissage cruise from Trieste.

'She is the best expression of our new brand positioning: Italy's finest. It's passion and the modern Italian lifestyle, hospitality and elegance,' he added.

Thamm toasted ship's architect Joe Farcus at a presentation on board attended by Carnival Corp. & plc ceo Arnold Donald, who zipped over to Italy after attending the Regal Princess naming in Fort Lauderdale on Wednesday night.

Costa Diadema is docked at Ponte dei Mille at Genoa's historic Stazione Marittima, where festivities were to get under way in the early evening Friday and last until late night.

They include a parade of the godmother, Italian travel agent Carolina Miceli, and her international maids of honor, representing Germany, France, Spain and China. The ship will be blessed by the archbishop of Genoa and president of the Italian Episcopal Conference, Cardinal Angelo Bagnasco.

Then, on stage in the Emerald Theater, the godmother will cut a ribbon to release a jeroboam of Ferrari Gran Cuvée Trentodoc spumante to break on Costa Diadema's bow. The sparkling wine's label was created for the event.

A celebratory dinner will feature a menu by Michelin-starred chef Fabio Cucchelli, taking inspiration from the sea, and fireworks will cap the festivities.