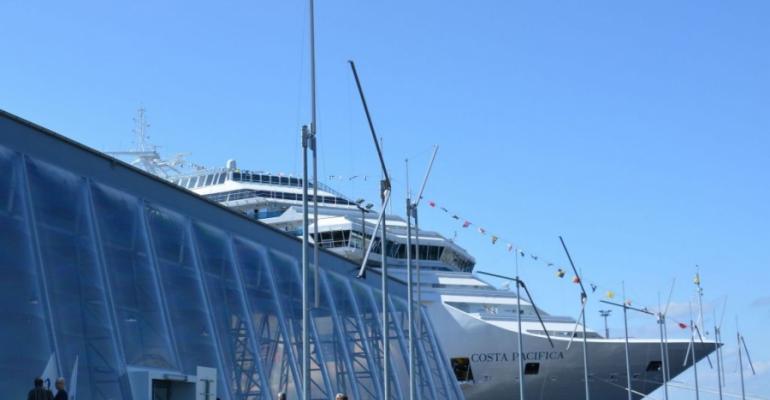 The Port of Kiel opened a new cruise terminal Monday with an inaugural turnaround by Costa Pacifica, which arrived at Kiel from Stockholm.

This brings the number of berths the German port is offering for handling large cruise ships to three. The two existing berths are located at Ostseekai. Additionally, small and medium sized vessels can be handled at Norwegenkai terminal.

‘Berth No. 1’, located in the Ostuferhafen ferry and RoRo docks on the eastern side of Kiel Fjord, was inaugurated in June 2013 with a call by Eurodam.

It was initially used for transit calls only, since terminal facilities for luggage handling and passenger check-in were not available.

Last autumn, a passenger pavilion was attached to an existing warehouse located next to ‘Berth No. 1’. It is 110mtr long, 14mtr wide and ten metres high. The passenger area used for check-in procedures and a seating area comprises 1,560sq mtr. Additionally, 3,000sq mtr of space is available for luggage handling as well as security and customs checks.

The new facility has been planned in cooperation with German immigration and customs authorities, ensuring a fast and smooth control procedure for disembarking passengers. Capacities have been tailored for full turnarounds of ships carrying a maximum of 4,000 passengers. The 400mtr long Berth No. 1 allows Kiel to handle the largest ships calling German Baltic ports.

Dr Dirk Claus, md of Kiel Port, suggested if necessary, facilities at Ostuferhafen where Berth No. 1 is located can be expanded. He noted the terminal’s easy access to road and rail. So far only cargo trans have been using the facilities but a feasibility study is underway for passenger trains to operate regularly between Kiel’s central station and Ostuferhafen on days when a cruise ship is in port. Additionally, the railway siding could be used for passenger charter trains taking guests on excursions.