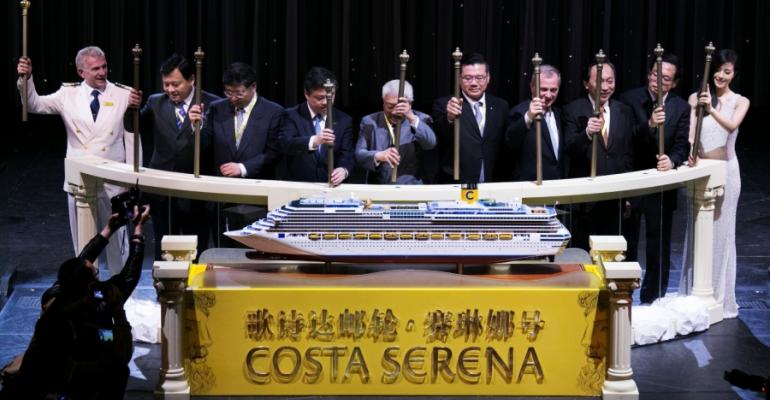 Joining Costa Atlantica and Costa Victoria, her arrival brings to three the number of vessels Costa is homeporting year-round in the Chinese port.

Costa Serena’s arrival increases the lines’ capacity in the region by 74%.

‘After nine years of successful operations and explicit support and encouragement from the Chinese government, Costa Cruises will continue to expand its offerings and satisfy the demands of the China market,’ he added.

Gao Yuanyuan, a Chinese actress, was on site to bless the Costa Serena on her debut. She was also named Costa Cruises brand ambassador.

Bok remarked, ‘Costa Serena brings a taste of Italy tailored to maximize the luxury for our Chinese guests. Our success in China has come from expanding on the enjoyment of our guests onboard. The support from our prominent partners and local authorities here in Shanghai has been instrumental to our incomparable growth and we are grateful for their invaluable assistance.’

Today's celebration follows Bok’s official announcement on the addition of a new cruise ship to the China fleet in April 2016.

Costa Fortuna will be the fourth ship of Costa’s investment plan in China, further increasing the capacity by 38% in 2016.