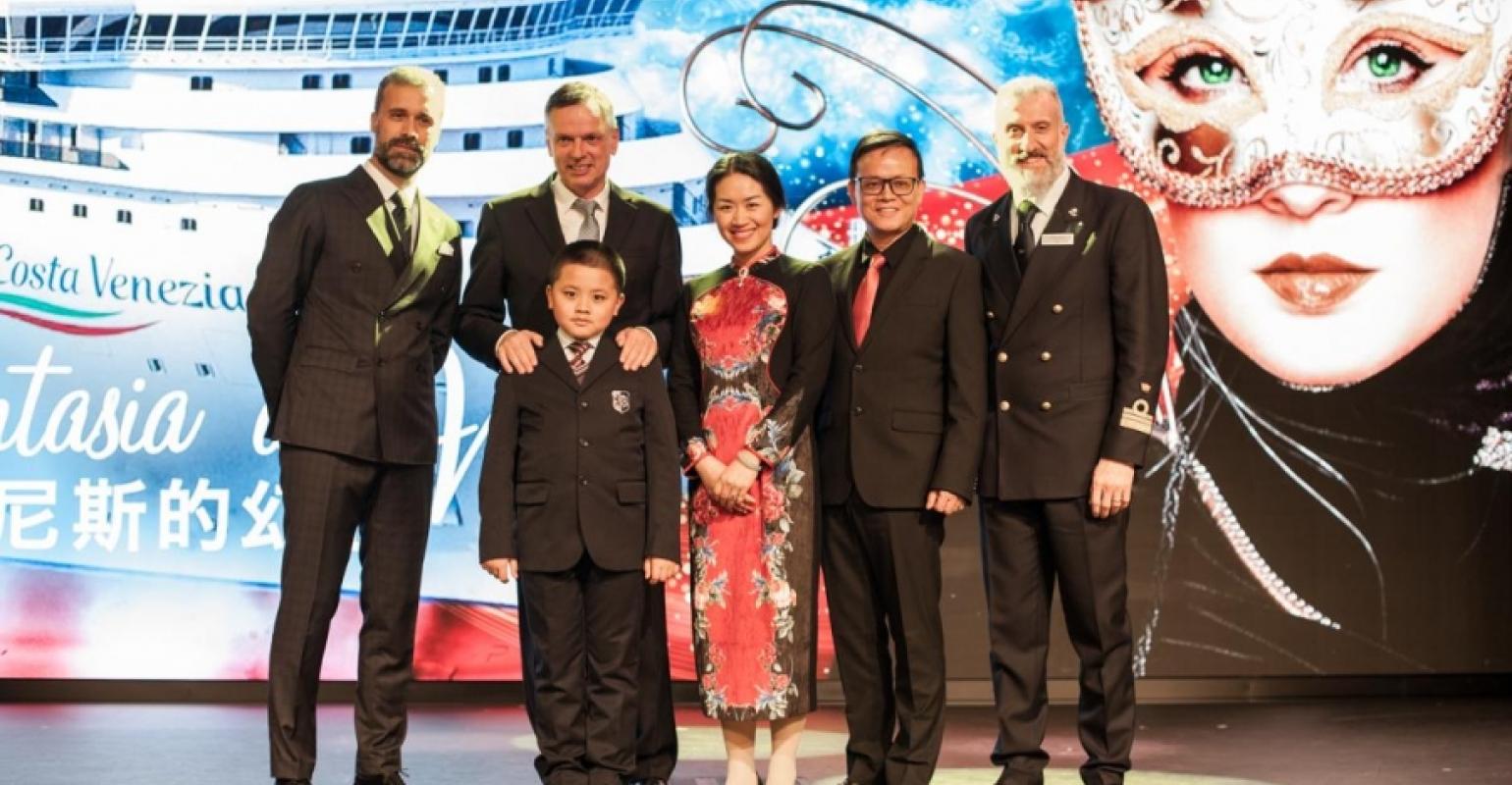 Godmother Gan Beiye and her family on stage in the Teatro Rosso with, from left, Costa Asia's Mario Zanetti, Costa Group/Carnival Asia's Michael Thamm and Costa Venezia Capt. Giulio Valestra FILE PHOTO: Costa Cruises
In festivities that began with an acrobatic air show by the Italian Air Force's Frecce Tricolori over Trieste, Costa Venezia—built for the Chinese market—was named Friday by the matriarch of a Chinese family who are Costa Cruises fans.

Gan Beiye and her family first sailed with Costa in 2011.

The naming celebration was shared with the city of Trieste thanks to a collaboration with the municipality, the Friuli Venezia Giulia Region and the Eastern Adriatic Sea Port Authority.

First the Frecce Tricolori flew in tight formation over the port, coloring the sky with the white, red and green of the Italian flag. The actual naming ceremony took place in the ship's Teatro Rosso and was displayed on a giant screen installed at Trieste's Piazza Unità d’Italia.

Since the ship is registered in Italy, the Italian national anthem was played, and Costa Venezia's bell was delivered to Capt. Giulio Valestra to be placed on the bridge.

Some 2,000 Costa Venezia guests from China, South Korea, Japan and several European countries then attended a gala dinner with a menu by the Italian chef Umberto Bombana of the three-star Michelin restaurant 8 ½ - Otto e Mezzo Bombana. That was followed by 'Venezia Innamorata,' a show inspired by the love stories of Giacomo Casanova that was created for Costa Venezia's Teatro Rosso.

Fireworks, accompanied by music, were scheduled for midnight.

Food donated to the needy

This program by Costa and Fondazione Banco Alimentare, launched in July 2017, has already allocated 100,000 portions of 'ready-to-eat' food with high nutritional value at various ports in Italy.