Creating a 'beautiful tapestry' with tea 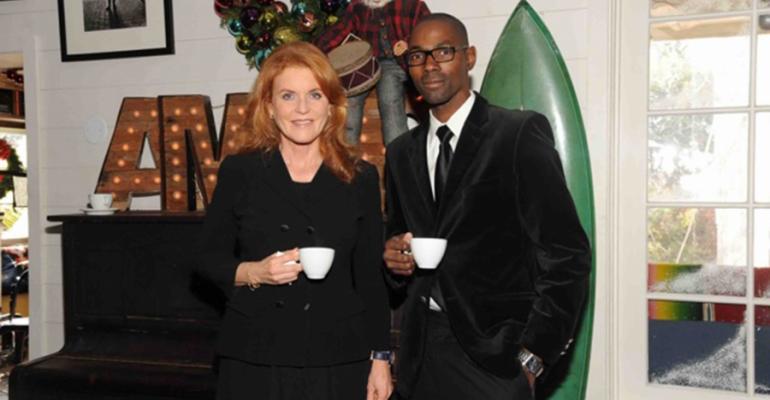 Lawrence Charles with the guest of honor at a private afternoon VIP tea for the Duchess of York by Charles & Company (Photo: John Heller)

Tea. 'No other beverage has the ability to positively affect the body, soothe the mind, and create opportunities for relaxed, enjoyable social interactions.'

So says Lawrence Charles, the founder and ceo of Charles & Company, a Los Angeles-based premium tea purveyor, a celebrity events mastermind and a supporter of social causes. Now Charles hopes to brew new business in the cruise industry as tea's popularity soars among millennials and health-conscious consumers.

Tea is a $90bn business globally, and worth $17bn in the US and growing fast, according to Charles. In the past couple years Starbucks bought Teavana in a $620m deal, Sara Lee Corp. snapped up Tea Forté (now part of Jacobs Douwe Egberts) and Peet's Coffee & Tea acquired Mighty Leaf Tea.

Veteran luxury cruise executive Dietmar Wertanzl said afternoon tea has always been a part of cruising, springing from the British ocean liner tradition. He thinks the tea experience on most ships now is pretty good.

'The sophistication and connoisseurship and knowledge about coffee and tea in hospitality have definitely increased. People are much more discerning about coffee and tea,' Wertanzl said. Tea has become a lifestyle trend, he added, as people focus on organic and healthier choices, and herbal teas are often requested now.

Charles, who attended his first Seatrade Cruise Global this year to explore sea-going possibilities, believes he can bring a more contemporary caché to cruising.

'We are a garden party brand, the Ralph Lauren of tea, and our brand is associated with British royalty,' he said.

The Charles & Company name conjures up a royal connection—Catherine of Braganza and King Charles II are credited with making tea fashionable in the British court. And Charles has served his teas to modern-day royals and celebrities (Orlando Bloom is a fan).

Charles & Company will soon present 'Tea with Victoria Summer' in support of the actress's new film, 'Game of Aces.' The event at the British Consulate Residence in Los Angeles will gather 'celebrities, tastemakers and influencers' for an evening of mingling, socializing, cocktails, tea and vegan bites, with a drawing to benefit Teen Cancer America.

Charles has organized a private VIP afternoon tea for the Duchess of York and he creates an annual 'tea spa,' bringing in beauty professionals to pamper the guests as they sip and socialize. A polo party fundraiser drew celebrities and benefited the nonprofit Safety Harbor Kids. At an event with the designer Christopher Guy, Charles served the entrepreneur Elon Musk.

'I'm probably the most connected guy you'll ever find,' said Charles, a former Tommy Hilfiger model and spokesperson, who fell in love with tea while living in New York. 'Sipping on delicately steeped Japanese Sencha while munching on freshly baked macaroons in teashops in Greenwich Village and the edge of Harlem seemed able to shut out the noise and rush of the city,' his website says.

Hobnobbing aside, Charles is serious about his product. 'It starts with the tea. It has to be great tea. Then the experience—how can we do something to bring guests together, with the caché of a respected brand.'

Malibu Farm's cafe and restaurant on the Malibu Pier are customers, and Charles is working with Nobu Hotel at Eden Roc Miami Beach, set to open in the fall. With cruise lines, he's talking about supplying teas for shipboard restaurants, teatime, in staterooms and at events.

'Right now is a great time to take a look at current offerings,' Charles said, 'to reconsider how customers are intepreting your brand and what it means to walk on board and see a beautiful historic tapestry, something that's not generic.'