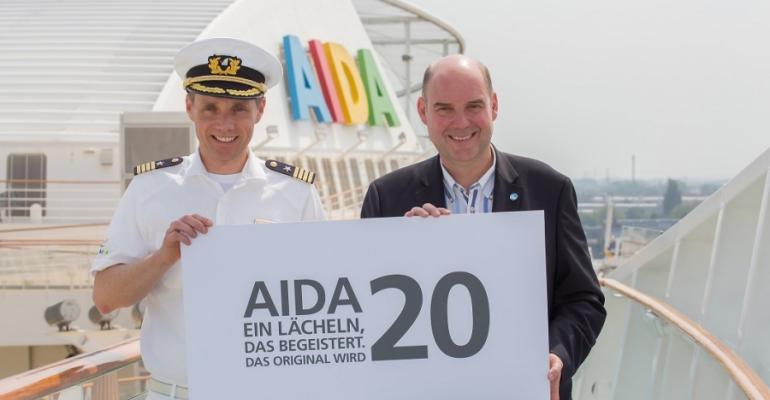 AIDA Cruises celebrated its 20th anniversary with its passengers on Sunday, exactly two decades after the first AIDA vessel—AIDAcara, originally Aida—was christened at Rostock. More than 20,000 passengers were to toast aboard the 10 current AIDA ships, opening the anniversary celebrations.

'With the commissioning of AIDAcara, we triggered a revolution in the cruise market, and for the first time we also generated a great deal of enthusiasm for this type of vacation among young and lifestyle-oriented people,' AIDA president Michael Ungerer said. Since then, more than 5m people have traveled with the line.

'Today AIDA is synonymous with the most desirable vacation in Germany,' Ungerer added.

The company built nine of its vessels in Germany and invested a total €2.5bn.

Twenty years after its debut, AIDA is widely considered the company that revolutionized ocean cruising in Germany. Before AIDA, most Germans regarded cruising as expensive, conservative, formal and for old people. Seagoing holidays had already gained popularity through the television show 'Das Traumschiff,' starring Deilmann's Berlin at the time, but cruising was far from a mass phenomenon.

Within only a few years, AIDA transformed the image of ocean cruising into an affordable, exciting and fresh holiday. The brand cultivated new target segments including young couples and even students.

In 1999, the one-ship operator commissioned two additional newbuilds at Aker MTW in Wismar, starting its dynamic expansion, which continues.

Next year, AIDA will become the first operator ever to deploy a ship on year-round cruising from a German port. Hamburg will become the base for AIDAprima's seven-day itineraries to the western Europe.

On the occasion of Sunday's anniversary, AIDA launched the campaign 'AIDA—an inspiring smile. The original turns 20' with a birthday deal for traveling on AIDAcara to the Canary Islands and Cape Verde between November and March. Passengers who make bookings by June 30 can take family or friends in the third and fourth bed in the same stateroom for free, under the 'two pay, up to four travel' promotion.

Prices start at €899 per person. Availability is limited.