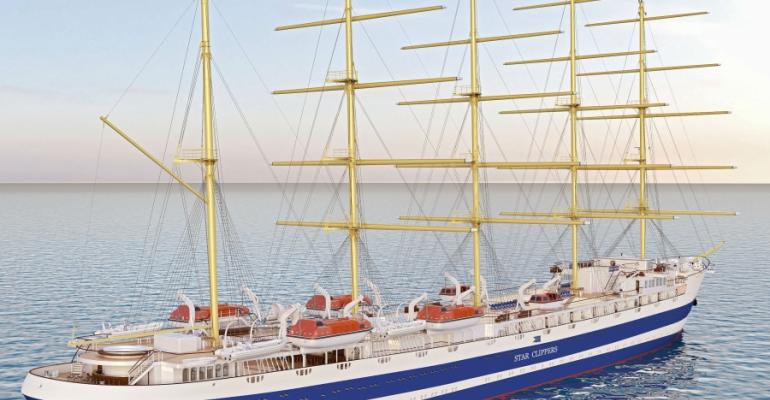 The new vessel, yet to be named, will be the company’s biggest and most ambitious to date and will be launched in the second half of 2017, carrying 300 passengers, measuring 8,770gt and powered by more than 6,350 sq mtr of sails. Estimated cost is €100m.

The new ship will technically be a five-masted, square-rigged barque.

While 2000-built Royal Clipper is modelled on the legendary German sailing ship Preussen, the new member of the fleet will be a near-replica of the France II, commissioned in 1911 and the largest square rigger ever built.

Mikael Krafft, founder and owner of Star Clippers, says: ‘We have already built the five-masted full ship Royal Clipper, which is very much influenced by the Preussen. This time, we intend to build a ship inspired by France II, an ambition I have had for a long time. The ship’s rig will be identical to France II and dimensions will be very similar, although we have added various features.’

The new vessel will have three pools, one that funnels sunlight through the ship’s atrium into the dining room. There will be a watersports platform in the stern for use when the ship is at anchor and a variety of cabin grades, including 34 suites with balconies and four owner’s suites.

A restaurant in the light-filled atrium will accommodate all passengers for open-seating dining.

The new ship will initially sail the company’s most popular itineraries in the Mediterranean and the Caribbean. Sales are expected to open next year.