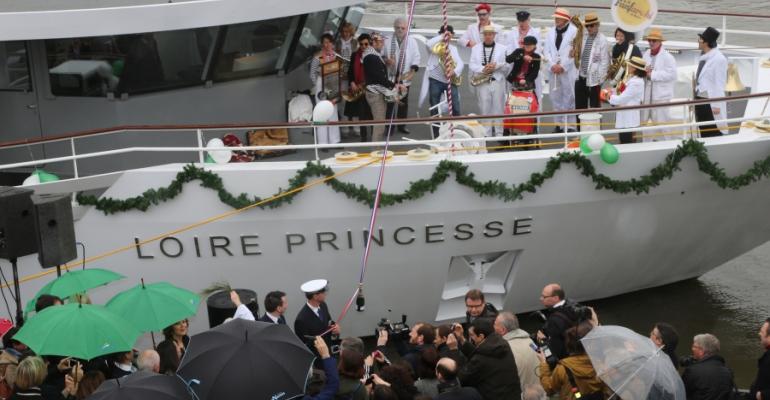 The Strasbourg-based French operator named the 104-passenger capacity Camargue in Lyon on Wednesday. The vessel is due to sail 6-8 day voyages between  April and November from Lyon, with stops at Macon, Vienna, Arles, Avignon, Viviers and Tournon.

Today, 96 passenger capacity paddle wheeled Loire Princess is being named in Nantes by godmothers Johanna Rolland (the Mayor of Nantes) and Charlotte Britz (the Mayor of Sarrebruck, its German twin city for 50 years), as well as godfather Laurent Castaing, STX France’s general manager.

Jean Verne, great-grandson of the famous French novelist, will be a guest of honour.

This 95mtr long prototype built specifically for the shallow depth of France’s longest river will sail 6-8 day cruises on the Loire from April to November calling at Nantes, Saint-Nazaire, Ancenis, Angers, Saumur and Bouchemaine.

On April 17 CroisEurope is set to name  a third newbuild, 66 cabin Gil Eanes in Porto, Portugal.

CroisiEurope will continue to add new ships in 2016/17 namely, Elbe Princess on the Elbe, Princesse Apsara on the Mekong and, in France, the Danièle and Deborah barges respectively on the Briare and the Garonne canals.

Set up 36 years ago and family run,  CroisiEurope - which last month joined CLIA as a global cruise line member and part of the CLIA Specialty Cruise Collection – operates a fleet of 43 river vessels (24 to 180 passengers each), offering cruises in France (Seine, Rhône, Saône, Garonne, Dordogne, Loire, Meuse, Rhine), Italy (Pô), Spain (Guadalquivir), Portugal (Guadiana, Douro), on the Rhine and its tributaries, on the Danube, on the Elbe and the Volga, on the Mekong (Vietnam and Cambodia), the Irrawady (Burma), and the Chobe River(Africa).

In 2014, CroisiEurope welcomed 197,894 passengers and, reported a turnover of €146m, representing an 8% increase  compared to 2013. 55% of passengers carried are French with the remainder spread across other European countries with the top five source marjets ranking as Germany, followed by Belgium, the British, the Swiss and the Spanish.