Cruise and passenger shipping recognised at the 2018 Seatrade Awards 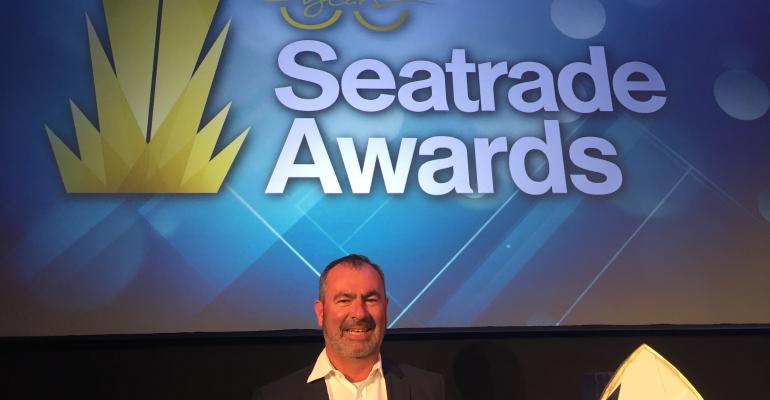 Three cruise and passenger shipping companies - Costa Cruises, The Fjords and P&O Ferries - received recognition at this year’s Seatrade Awards which was a celebration of 30 years rewarding excellence across the entire shipping industry.

The event, which took place Friday at London's Landmark Hotel, had a celebratory feel as Seatrade chairman Chris Hayman read out a roll call of some of the famous guests of honour that have attended the annual event held in London, including the Princess Royal (numerous times), Prince Andrew, Duke of York, the late Edward Heath, former UK prime minister and current prime minister, Teresa May when she was shadow transport secretary.

This year's guest of honour was Kitack Lim, IMO secretary-general.

Winner of the Corporate Social Responsibility Award was Costa Cruises for its 4GOODFOOD programme.

This award recognises a leading corporate social responsibility (CSR) policy or initiative delivered in the last year. The policy must have successfully contributed to the welfare of the company’s employees, its local community and its business performance overall.

The food experience is a key part of the cruise and the relevant figures are quite staggering: some 54m meals a year are prepared on board the Costa fleet. Healthy nutrition and reduction of food waste on board is at the very heart of the company’s sustainability strategy.

Costa structured the 4GOODFOOD programme, a unique project in the industry, with clear objectives and proven results, in order to reduce food waste fleetwide by 50% by 2020, ten years ahead the 2030 Agenda (SDGs 12, target 12.3).

With 4GOODFOOD, Costa entered in the network of Friends of Champions 12.3, the coalition of International leading organizations and companies active in the target of halving global food waste (Goal 12.3) 4GOODFOOD is a far-reaching programme (based on four pillars) that considers every aspect of food preparation and consumption on board.

In partnership with the University of Gastronomic Sciences, Costa began by remodeling its food & wine offerings based on sustainability and the rigorous selection of quality products and ingredients while prioritizing the seasonal availability and local sourcing of produce (15% of food sourced locally). This included the review of 572 regional and local recipes reflecting Italy’s culinary heritage and the Mediterranean Diet.

Together with Winnow, Costa placed kitchen scales in the galleys and kept a centralized record enabling the mapping, quantification and analysis of wastage at food processing and preparation level. In the test phase, the program yielded a 54% reduction in food waste.

The campaign TASTE DON’T WASTE, designed to directly involve guests by encouraging responsible consumption and proactive engagement, particularly in the buffet area, has been positively received.

Over 90% of the guests well accepted the initiative leading to a 20% reduction of plate waste. The engagement of guests to reduce plate waste on responsible consumption is calculated by the Winnow system and as a result Costa is directly supporting the opening of 50 Food Gardens in Africa.

Costa teamed up with the food bank charity Fondazione Banco Alimentare to launch a surplus food donation scheme. Costa retrieves and donates ‘ready to eat’ meals prepared on board but not served in the ship's restaurants. Approximately 23,000 portions were distributed to communities in need. Started in Italy, the operations will be expanded to other Mediterranean ports.

The Award was received on behalf of Costa by Yvonne Katende, customer success manager, Winnow.

Future of the Fjords highly commended in Fuel Efficiency

In the Fuel Efficiency Award, Norwegian tour operator The Fjords received a Highly Commended recognition for sightseeing passenger vessel Future of the Fjords, the world's first all-electric and completely emissions-free ship, launched in April this year.

Upon receiving his certificate The Fjords chief executive Rolf Sandvik told Seatrade Cruise News, ‘it is an honour to be shortlisted and highly commended in the very competitive Fuel Efficiency category and to represent our company among such prestigious winners and finalists within the wider shipping community.’ He also revealed that a newbuild sister ship to Future of the Fjords was very close to be confirmed.

Young Person of the Year is P&O Ferries' master

A full roll of honour list for the Seatrade Awards 2018 can be found on Seatrade Maritime News.