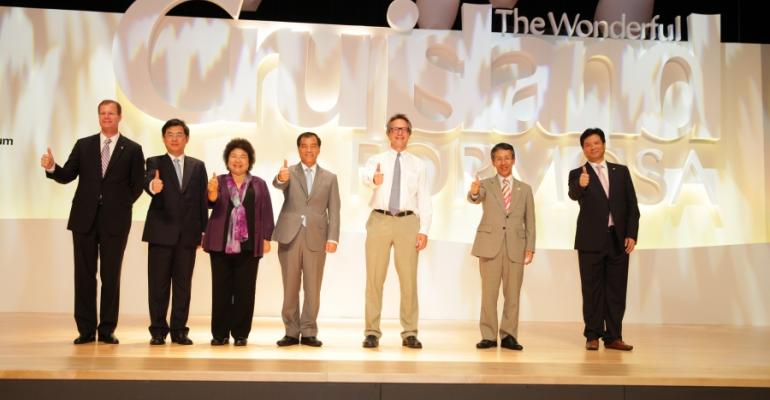 He observed 7% of world's cruise deployment is now in Asia Pacific, compared to 29% in the Caribbean and 24% in the Mediterranean. ‘There is a constant evolution of moving ships around the world,’ he said.

In 2013, China accounted for 500,000 cruise passengers but these represented just 0.04% of a population of 1,340m. ‘The strategy is to move ships closer to new customers and there is also a need for new routes to appeal to repeat passengers,’ told the audience.

He said the $33.3m RCCL–TIPC  (Taiwan International Ports Co.) bid to build a cruise terminal and waterfront recreational facilities in Penghu is in line with the region’s need for destination development. The project is scheduled for completion in April 2016. The pier is designed to accommodate up to 225,000gt cruise ships.

A panel discussion followed, in which Wayne Hsi-Lin Liu, deputy director, Taiwan Tourism Bureau said Taiwan has claims to be ‘Asia's best kept secret’ for its cultural, historical and natural landscape offerings. ‘There are many attractions within an hour's radius of cruise arrival ports,’ he added.

The Taiwanese panelists unanimously agreed that while Taiwan's cruise industry has much potential, the red tape regarding cross- Straits travel between China is impeding growth.

Alex Hou, vice general manager, Shanghai International Travel Service Ltd gave a travel agents view: since the opening up of the Chinese market many have travelled to Taiwan on 6-8 day land package tours but this does not work as well for cruises, he commented.

Since 2013, Chinese are allowed to cruises to Taiwan and  Star Cruises was the first to sell a China-Taiwan cruise product. Last year, Chinese operator Henna started calling to Taiwan and that has proved ‘to be popular’, he said. However, while Hou's company handles some 60 tour groups per month, this does not translate readily into the cruise sector. He said they sell mostly to Koreans rather than Taiwanese.

Red tape at operational level for cross-Straits travel still is difficult to wade through,  despite the easing of cruise travel restrictions. It takes 45 days to apply for a visa whilst cruises also cost as much as taking a flight.

Travel industry veteran, Ching Chi-Hsu, country director Carnival Corp, Taiwan Branch, pointed out that Taiwan is strategically located between Japan and Singapore and is well placed for homeporting. Itineraries to destinations such as Yokohoma, Kobe, Shanghai and Singapore are possible.

Ching said with Taiwan government's  commitment to building up cruise infrastructure, such as the upcoming cruise terminals in Keelung and Kaohsiung, the cruise sector is set to add to Taiwan's economy.

Jean Chang, president Golden Foundation Travel Group also welcomed the prospect of Taiwan starting homeporting. Chang said they now have the experience of managing large cruise vessels which have recently visited Taiwan. She said 95% of these stop at Keelung which is close to Taipeh city and offers many shore excursions within close range, including the hot springs in Taipeh, the National Palace Museum and tea-leaf picking.

She reiterated that sailings to China are difficult because of regulatory concerns. ‘We need transparent policy-making decisions, she said. ‘Currently we need to submit application for permits so far ahead of sailing dates and this makes it hard for sales. If we can get around these obstacles, we will have increased business opportunities given that the Taiwanese want to go to China and Chinese want to visit Taiwan.’

Chinese passengers can sail far easier to Korea than to Taiwan, she complained.

Masami Masuyama managing director, NYK Cruises said the company's 50,142gt Asuka II is dedicated to Asia offering a range of sailings from 100 days world voyage to one-night cruises. He reported some sailings have just three Taiwanese passengers onboard while others have dozens, especially in the summer. Asuka II has called at Taiwanese ports of Kaohsiung, Keelung and Hualien. He explained Japanese cruisers find Taiwan friendly, has sufficient infrastructure and is close to Japan – just seven hours from Okinawa. He observed the need for more Japanese-speaking guides.

Xu Zeng, Director & gm, China International Travel Service Group Cooperation noted Xiamen is one of China's five major cruise ports close to Taiwan and he reminded the audience that they share a common language. He called for Taiwan and Xiamen to work together to maximize opportunities.