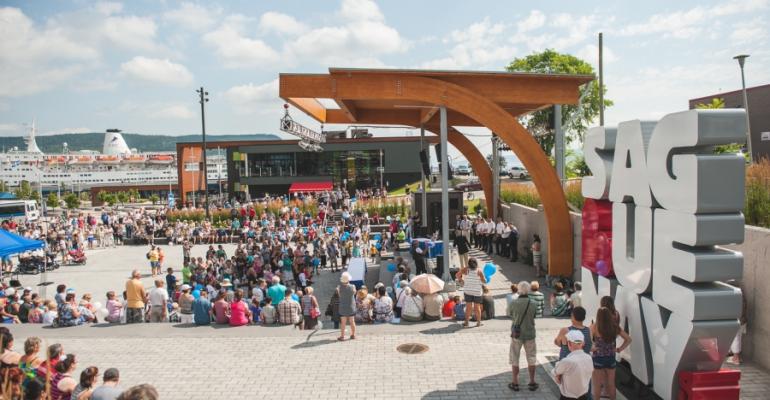 Québec's St. Lawrence region continues to thrive as a cruise destination, with more ships and passengers and many more calls and turnarounds in 2015 than ever before.

Some 29 ships made a total of 435 calls at the nine ports that comprise Cruise the St. Lawrence. They carried 269,940 passengers, including 115,427 who embarked or disembarked at Québec City or Montréal, generating added visitor spending at each of these two destinations.

The three busiest ports were Québec, Montréal and Saguenay, whose respective shares of the region's interntional cruise passengers were 45.1%, 24.3% and 12.2%. Many of the St. Lawrence ports welcomed new ships. Plus, 2015 marked the return of Marco Polo, which first visited Québec in 1966.

'Destination Saint Lawrence consistently gains in notoriety with international cruise lines,' according to Dominique Vien, minister of tourism, minister responsible for the Chaudière/Appalaches region and member of the National Assembly for Bellechasse. She credited promotional activities and the implementation of strategies developed by the Ministry of Tourism and international cruise sector partners.

'Given that cruise‐based tourism generates added annual visitor spending of $145 million and accounts for 1,600 direct sector‐related jobs, we must continue to deploy all necessary efforts to ensure that we position the Saint Lawrence as a destination of choice,' Vien said.

Through Québec's first maritime strategy, the government will facilitate the modernization of cruise passenger infrastructure at Québec and Montréal, while supporting other St. Lawrence enhancement initiatives, D'Amour added.

For his part, Sam Hamad, minister of labour, employment and social solidarity and minister responsible for the capital region, said the cruise business contributes nearly $25m in added value to the Québec region's economy.

Based on current bookings the 2016 season is expected to be equal or better than this year's, according to Tony Boemi, president of Cruise the St. Lawrence and vp growth and development at Montréal Port Authority.

'This is a sure sign of cruise line confidence and proof positive that efforts by member ports of call to enhance cruise passenger greeting infrastructure have begun to pay handsome rewards. We aim to pursue efforts in this regard and provide passengers with the best greeting experience in the industry,' Boemi added.