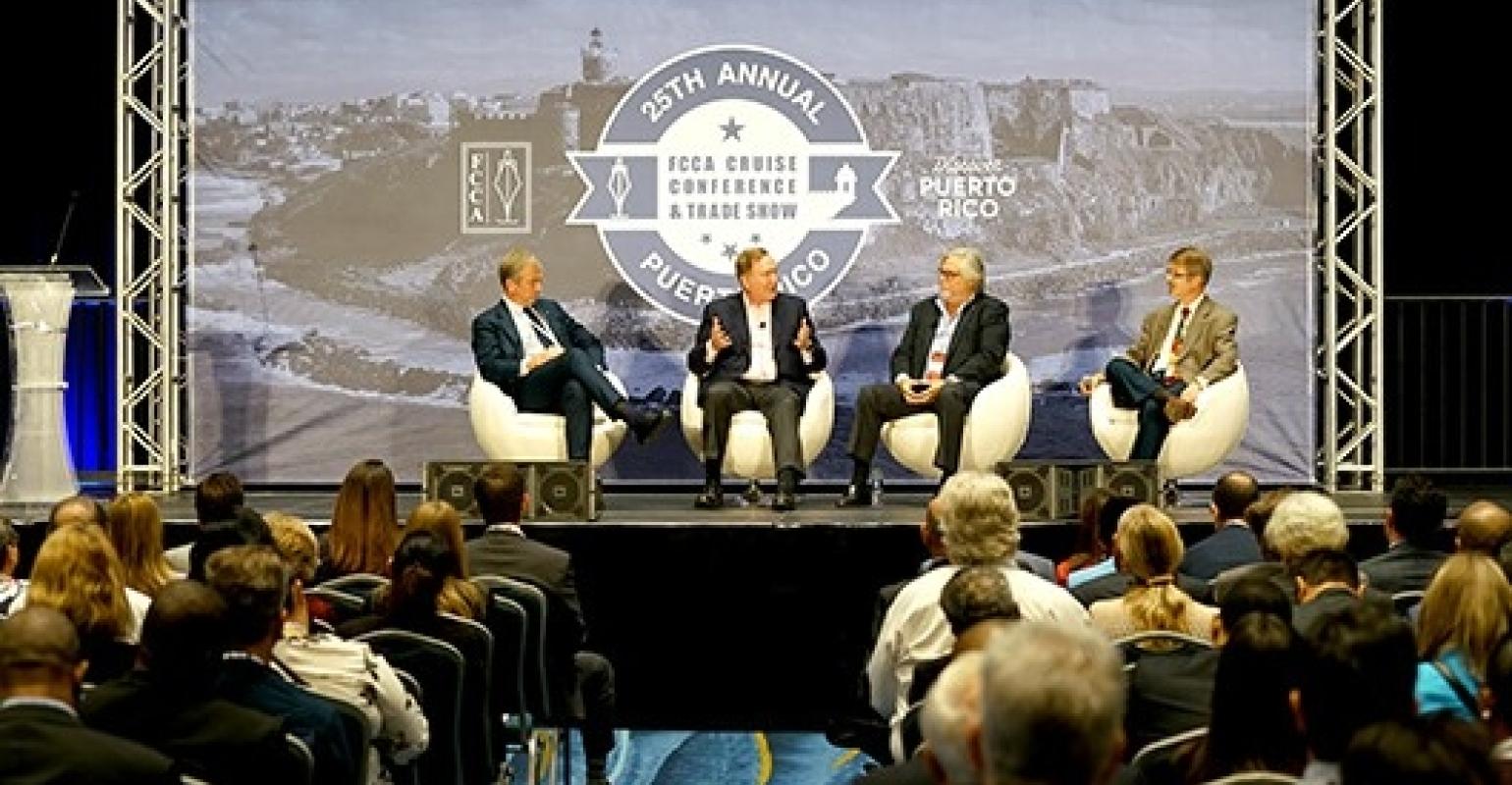 The 'Chair Talk' featured Carnival's Micky Arison, Royal Caribbean's Richard Fain and MSC Cruises' Pierfrancesco Vago
The Florida-Caribbean Cruise Association's 'Caribbean is Open/Caribbean for Everyone' campaign has enticed travelers to the region, but 'horror stories' continue to pop up in the media, showing conditions that no longer exist, Carnival Corp. & plc chairman Micky Arison said Tuesday. Such reports may help destinations get aid but they 'deter the demand in a big way.'

This poses a special challenge for Puerto Rico in the Miami and New York markets, Arison told the FCCA Cruise Conference & Trade Show in San Juan during a session featuring cruise company chairmen.

'Perception is reality,' observed Richard Fain, chairman and CEO, Royal Caribbean Cruises Ltd. 'The perception continues to be there is a problem coming to the Caribbean. After such a devastating series of hurricanes, one after another, people continue to suffer.' But the response was 'amazingly fast,' he said, and any impact has 'completely dissipated' for tourists.

'We need to work together as never before,' Fain added, because tourism dollars are needed for recovery.

Pierfrancesco Vago, executive chairman of MSC Cruises, felt the relief efforts could have been better coordinated: 'We sent containers. They could not be unloaded in Puerto Rico.'

But Fain thought there's been 'tremendous improvement' in the ability to respond to natural disasters since the Haiti earthquake of a few years back. He described that as 'total disfunction. Every NGO wanted to solve things in their own way.'

In contrast, after last year's hurricanes, 'the response was quite good' given the terrible difficulties with communications, Fain said. The focus was on getting ports open, and that happened within a few days in Puerto Rico's case.

The best thing to come from the hurricanes was partnering with J.Lo (Jennifer Lopez) for the 'Caribbean is Open' campaign, Arison said.

'I got Andrea Bocelli,' Vago chipped in.

'I had the better deal,' Arison responded.

'I ended up in an Army camp,' Fain said.

'Cuba is not a panacea'

Cuba was among other topics addressed during the 'Chair Talk' moderated by Tom Stieghorst, senior editor, Travel Weekly.

Cuba is 'not a panacea for the whole cruise industry,' Vago said. 'Still, there will be big growth,' he added, and the infrastructure plans announced in Global Ports Holdings' 15-year agreement to manage the Havana cruise port will 'definitely help. Bigger ships will come.' Vago added: 'Cuba is a fantastic experience.'

But, to put things in perspective, the Carnival chairman said the number of passengers who cruised to Cuba last year was less than those that visit Cozumel in a week.

Addressing the chairmen's visions of what will be different for cruising in the future, Vago said it's a challenge—though one that MSC relishes—to design the experiences that people are going to want years from now in a world where technology is constantly changing.

'Ships keep getting bigger and smaller'

'The good news is that ships keep getting bigger and smaller,' Fain said, pointing to the fact that his own company has introduced the world's largest cruise ship and is building 100-passenger vessels for exploration cruising, which he called the 'fastest growing area.'

Both Carnival Corp. and MSC Cruises are building larger and smaller ships, too.

Fain also cited a trend to closer partnership with destinations, and a focus on 'sustainability as a defining issue of our time.' He expressed pride that the cruise industry has come up with so many innovations to support sustainability.

Arison said cruise companies are strategically planning for 10 years out and longer. The planning cycle has lengthened because of shipyard availability pushing newbuild orders 'further and further out.'