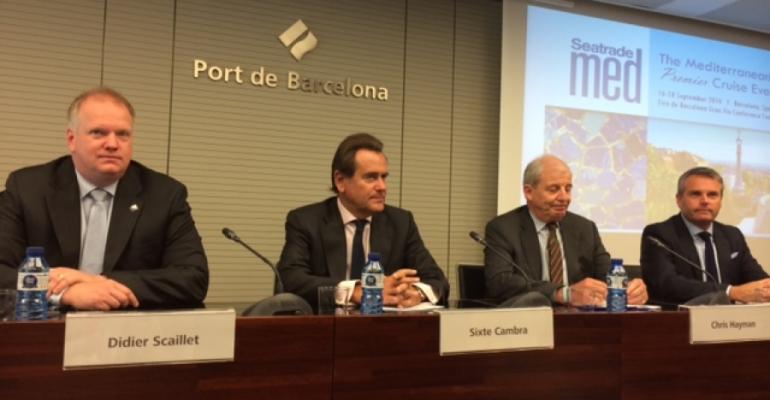 2,000 attendees from around the world gathered in Barcelona Monday ahead of the start of Seatrade Med 2014, running from September 16-18.

The 10th edition of the two and a half day exhibition and conference,  has attracted over 600 registered delegates and more than 150 cruise line executives and the largest exhibition since it started 20 years ago in Genoa. This year’s edition is the first time Seatrade Med has been held in Barcelona and the first time outside of Italy and France.

Andrew Williams, general manager Seatrade, called it ‘a dynamic and prosperous event’, at a pre-event press conference hosted by Port of Barcelona at the city’s World Trade Centre.

Seatrade chairman Chris Hayman spoke of the range and quality of the ports and destinations across the Mediterranean and the growing size of vessels deployed in the region resulting in a huge increase in passenger numbers in the last two decades and the extension of the season making it an established year-round business.

Port of Barcelona president Sixte Cambre welcomed Seatrade Med attendees to the city and spoke of the port’s record weekend past which saw 58,000 cruise passengers visit Barcelona in three days including the maiden call of Royal Caribbean International’s Oasis of the Seas on Saturday. He said the events of last weekend and Seatrade Med in the coming days ‘makes Barcelona the capital of cruising this week’.

Ahead of the opening of the conference and exhibition tomorrow, MedCruise sponsored the Speakers Dinner this evening in the magnificent setting of the city’s Maritime Museum.

Over 150 guests heard MedCruise president Stavros Hatzakos speak about the growing membership representing more than 80% of the passenger movements and cruise calls in the Med and he call for greater co-operation between the cruise lines and ports to further grow the market collectively and he invited everyone to visit the MedCruise pavilion in the coming days which is the ‘largest participation ever at a Seatrade Med,’ he remarked.